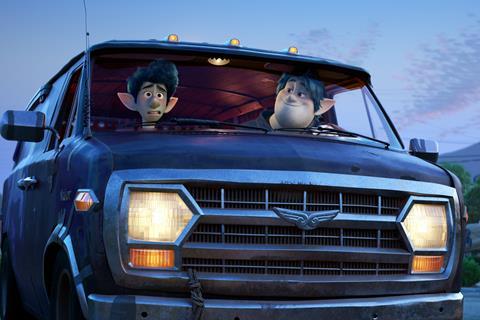 However, the small number of cinemas open and films playing meant that takings were low.

72 cinemas reported figures in England and the Republic of Ireland only, with venues in Scotland opening from July 15, and Wales and Northern Ireland still to announce their reopening dates.

Onward brought in the most money, taking £21,626 from 47 locations for a £460 average. Initially released in cinemas on March 6, the film played for three weekends prior to lockdown, and has a running total of £5.3m.

Trolls World Tour took second spot with £16,941 from 33 locations, for a £513 average. Universal caused controversy when it decided to release the film on home entertainment platforms in April, without a theatrical release. It claimed the release was the biggest digital launch in history. Including preview screenings, the film has £25,777.

Sony’s Bad Boys For Life was the strongest average performer of the top five, grossing £16,070 from just 18 locations for an £893 site average. It has now reached £16.1m after 11 weekends playing in cinemas.

Catalogue titles could benefit from the small number of new releases appearing this month. Disney’s The Greatest Showman was among these this weekend, taking £14,499 from 48 locations for a £302 average. The film was first released in December 2017, and has now taken £49.4m, making it one of the top 50 highest-grossing films of all time in the UK.

At least 32 more cinemas are scheduled to open in England this Friday (July 10), including 17 further Odeon venues, five more Showcase sites, and independent venues in Bristol, Blackpool, and the Isle of Man.

New titles set to be released theatrically on Friday include killer crocodile thriller Black Water: Abyss through Altitude in over 100 locations; and baking romance-drama Love Sarah through Parkland Entertainment.

The top five figures in this article were provided by ComScore.