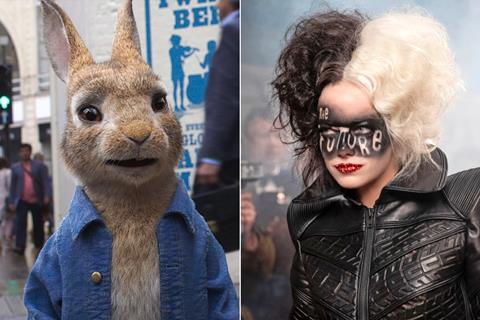 Peter Rabbit 2: The Runaway held top spot at the UK box office for a second weekend, as results held firm from last week’s good start despite sunny weather across much of the territory.

The Sony animation-live action hybrid took £2m across the weekend – a 47% drop on its previous session, which is a reasonable result given the climate, taking £3,512 on average from 606 locations. It added a further £737,434 on Bank Holiday Monday for £8.2m after 15 days in cinemas.

With schools now breaking for half term across most of the UK, the film will look to perform strongly on every day in the coming week.

Warner Bros’ horror franchise title The Conjuring: The Devil Made Me Do It opened in second spot for the Friday to Sunday period, taking £1.9m from 475 locations for the highest per-location average of the weekend at £3,946. With a further £399,510 on Monday plus previews, the film has £3m in total; it won’t reach the £10.5m and £11m totals of the first two films in the series, but given those were both pre-social distancing measures, the third film has made a decent start.

Disney’s Cruella landed in third spot on its first weekend with £1.5m from 522 locations for a £3,588 location average. It has £1.9m total after a further £422,613 on Monday, when it overtook The Conjuring 3 but fell behind previews for A Quiet Place Part II. The film launched simultaneously in cinemas and on Disney+ on Friday, indicating that the dual launch does not fully negate the theatrical appetite among audiences.

Nomadland, another Disney release, dropped 64% on its first weekend for a £179,011 Friday-Sunday session, and has £1.5m after 15 days in cinemas. It will be the lowest-grossing Oscar best picture winner in the UK since 1990’s Driving Miss Daisy; however it is also the only one to be released in socially-distanced venues, as well as having a prior Disney+ release.

Lionsgate’s Spiral: From The Book Of Saw dropped 68% on its first weekend, adding £156,292 to reach £1.2m to date. the previous Saw titles have all landed in the £5m-£8m range, making this a useful metric for how box office takings for franchise titles may change.

Kelly Reichardt’s First Cow opened to £21,619 for Mubi, from 40 locations at an average of £540. Including Monday’s figures and previews the film has £34,604; it will launch on Mubi’s streaming platform on July 9.

Earwig And The Witch, the first release from Danny Perkins’ Elysian Film Group Distribution, opened to £10,781 from 83 locations, and has £14,763 including the Bank Holiday.

Bohemia Media released Zebra Girl in nine locations - eight of them on Friday only - taking £615.