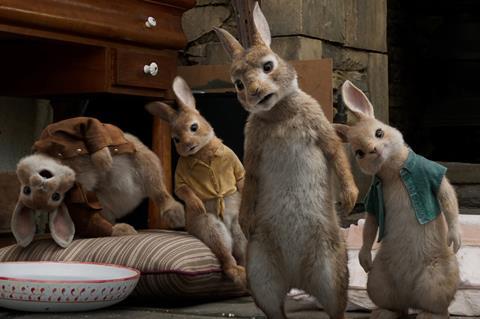 Peter Rabbit comfortably held onto top position at the UK box office this weekend with another impressive performance.

Following a bumper opening session, the family film added a further £4.6m to keep it top of the tree. It has now grossed £13.6m after just two weeks on release. With the four-day Easter holiday coming up next weekend Sony is optimistic this rabbit has plenty of spring left in its step.

Babak Najafi’s US crime drama Proud Mary, starring Taraji P. Henson, opened on 103 screens this weekend for Sony. It took £27,000 for a low site average of £262.

Landing best of the rest but a long way short of Peter Rabbit was fantasy action sequel Pacific Rim Uprising, which grossed £1.7m from 506 sites on its opening weekend. This compares to the opening of the previous film in the franchise, which was directed by Guillermo Del Toro, and garnered £2.2m from 494 sites and went on to gross £8.2m. It’s a figure the sequel may struggle to match.

Black Panther stayed third this weekend with a gross of £1.4m. That takes it to a running total of £44.9m. Disney is hoping it will run through to the release of The Avengers: Infinity War on April 26.

Coco has now grossed £18.1m ahead of a potential boost over the Easter holiday weekend.

Tomb Raider dropped a substantial 57% in its second week on release to gross £1.1m over the weekend and £5.5m to date.

Could The Greatest Showman be set to drop out of the top five? The remarkable film landed fifth in its 15th week, grossing £750,164 over the weekend, a drop of 29%. The musical has now garnered £40.1m in the UK, the biggest international territory for the film.

Steven Soderbergh’s iPhone-shot Unsane landed seventh in the UK in its opening weekend, posting £434,413 from 346 sites for an average of £1,256. Including previews, the film’s total opening weekend gross is £476,097. Although lower than Soderbergh’s most recent films, Logan Lucky (£649,632), Side Effects (£911,315) and Haywire (£1.2m), it is comparatively higher than Unsane’s US opening, also this weekend, which was $3.8m. This is based on the rule of thumb that says the US box office is roughly 10 times higher than the UK box office (in the respective currencies. Decent word of mouth could mean the low-fi feature has a decent UK run to come.

Political drama Mark Felt: The Man Who Brought Down the White House, starring Liam Neeson and Diane Lane, opened with £44,911 from 29 sites, including £1,978 in previews.

Hirokazu Koreeda’s Japanese drama The Third Murder posted £6,796 from 10 sites. Including previews, its gross is £9,171.

Warwick Thornton’s Australian western Sweet Country grossed £6,414 this weekend to take it to a total gross to date of £82,856.