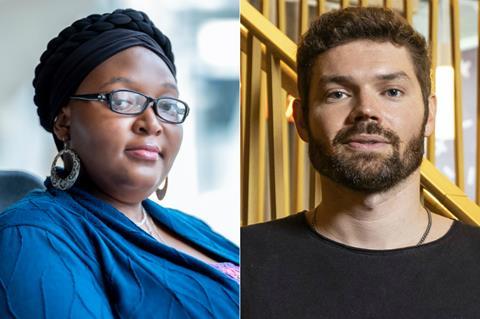 The script follows a young woman whose estranged mother goes missing and discovers a younger half-brother she never knew about while attempting to track her down.

The Jude Problem is set to be produced as a TV series by Headline Pictures, the London-based outfit whose previous credits include The Man In The High Castle for Amazon Studios.

This is the first year that one list has been issued for TV and film, having previously been split over two separate lists. There are 14 scripts on the list, chosen from 246 submissions. The Jude Problem received 12 recommendations for the list. Titles must receive a minimum of six to make the list and the recommendations come from UK film and TV companies.

All but two of the 14 screenplays have been written for TV. The two feature scripts both received seven recommendations. The first of those, Caring, is a horror-comedy written by Matilda Ibini and Gabriel Bisset-Smith, for producers Home Team Content and BBC Film. The story follows a disabled woman who, after much effort, finds a good carer – only to discover they are a serial killer. Bisset-Smith and Ibini were named Screen UK and Ireland Stars of Tomorrow in 2018 and 2020 respectively.

The second feature to make the list is Youness Benali’s Wildcard, about a young tennis player pushed to the brink by his father. Rooks Nest, known for features including The Witch and Surge, is set to produce.

The Brit List has been run by producer Alexandra Arlango since 2008. Titles on the inaugural list included eventual Oscar winner The King’s Speech while subsequent selections have included Paddington and The Favourite.

The Jude Problem by Amy Guyler
Producers: Headline Pictures
Format: TV
Genre: Comedy-drama
Summary: When her estranged mum goes missing, Jess is forced home to track her down - and is shocked to discover a nine-year-old half-brother (Jude) she never knew she had. But as she begins to spend more time with him, Jess soon realises that Jude is not like other children…

Bad Manor by Elliot Warren
Producers: The Forge
Format: TV
Genre: Crime thriller
Summary: The Dockers were once an infamous crime family, now they are struggling to get by. But the return of their youngest son from prison comes just in time to change their fortunes, as the family are plunged back into the depths of London’s criminal underworld.

Tivoli by Ameir Brown
Producers: available
Format: TV
Genre: Drama
Summary: When a bloody conflict erupts between a drug lord and the Jamaican state, the people of Tivoli gardens find themselves caught in the crossfire as the war on drugs hits Jamaica’s shores. Based on true events.

Wildcard by Youness Benali
Producers: Rooks Nest
Format: feature film
Genre: Drama
Summary: The searing true story of a promising young tennis player pushed to the brink by his father who will stop at nothing to win.

Opus by Wunmi Ibironke
Producers: available
Format: TV
Genre: Fantasy-drama
Summary: A dark coming of age comedy-drama based on Yoruba mythology. After 19-year-old Lorraine’s painting opens a portal to a mystical realm, she and her friends have to navigate their newfound powers and battle the demons and mythological creatures that have been unleashed in their east London town.

Last Week (previously Seven Days) by Alan McDonald
Producers: available
Format: TV
Genre: High-concept relationship drama
Summary: A hopeful, heartfelt relationship drama with a twist: in one week, a meteor will hit earth and humanity is finished - we’re the dodo but with iPhoneS. In a small Scottish town, a few locals with nowhere else to go try to make peace with their personal demons before it’s too late… And rediscover the value of community in the process.

Skin & Bone by Billy & Theo Mason Wood
Producers: Hattrick Productions
Format: TV
Genre: Thriller
Summary: A brilliant but struggling funeral director is forced to work for the Ukrainian mafia harvesting bodies and selling them on the black market before it is her and her family lying on the embalming table.

Dangerous Appraisals by Rosamund Attwood
Producers: Wall to Wall
Format: TV
Genre: Dark comedy / psychological drama
Summary: The world’s most invasive human resources assistant allows her infatuation with a glamourous older colleague to escalate into a violent obsession, set to destroy the lives of both women.

Mammy’s Girl by Roanne Bardsley
Producers: available
Format: TV
Genre: Drama
Summary: Struggling single mum Nia has big plans for her daughter, but when Carys makes a fatal mistake that will put her future in jeopardy, Nia’s forced to decide how far she’s willing to go to protect her only child.

Jailtown by Cat Jones
Producers: BBC Studios in association with Lighthouse
Form: TV
Genre: Prison thriller
Summary: A surreal thriller set in a prison. A sadistic wing boss has his reign threatened by his estranged brother’s return to the prison.

Delilah Must Die by Bel Knight, Clare Hoey
Producers: Big Talk Productions
Form: TV
Genre: Comedy-drama
Summary: A lonely and intense working-class girl wins a bursary to an elite girls’ boarding school where she meets teen dream Delilah. She doesn’t know whether she wants to be Delilah or fuck her, but her killer crush metastasises into a lethal obsession. Of some but the future of all.