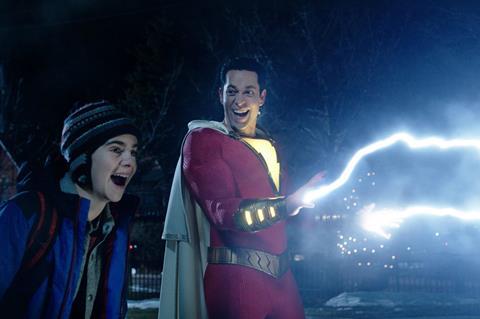 Superhero feature Shazam! opened top of the UK box office this weekend, posting a £4m debut from 603 sites – an average of £6,634.

The film is part of the DC universe of comic book films, but as one of the lesser-known properties the result looks decent, eclipsing the £3.8m opening posted by Aquaman last year. That film ended on £21.8m.

Dumbo dropped 44% this weekend with £3.5m, it’s now up to £12.1m after 10 days in play. The majority of UK schools are on Easter holidays from this week, which should boost takings.

Peppa Pig: Festival Of Fun, a feature spin-off of the popular kid’s property, opened with £982,473 from 505 sites, an average of £1,946. That’s the second best opening for a Peppa Pig feature, narrowly behind Peppa Pig: My First Cinema Experience, which opened with £1.1m and ended on £3.7m

Pet Sematary opened to a £1.3m three-day weekend, placing it third in the market. The film also took £300,000 in previews, placing it on a cume of £1.6m to date. It stars Jason Clarke and Amy Seimetz in an adaptation of Stephen King’s horror about a couple who relocate from Boston to rural Maine with their two young kids and discover a mysterious burial ground hidden deep in the woods near their new home.

Family animation Missing Link opened with £637,325 from 546 sites this weekend, an average of £1,167. The film should benefit from the school holidays over the next two weeks.

Fisherman’s Friends added a further £391,995 this weekend, a 38% drop on its previous session. The film again posted strong mid-weeks and is up to £5.9m lifetime in the UK, surpassing Fighting With My Family (£5.7m) and Finding Your Feet (£5.8m).

The Keeper, Marcus H. Rosenmuller’s biopic of German goalkeeper Bert Trautmann, who famously played on with a broken neck in the 1956 FA Cup final, opened in 78 sites, posting a non-final £77,780 for a screen average of £853.

Vincent Van Gogh film At Eternity’s Gate added £58,197 this weekend, an impressive 1% increase on its debut session last week. The film played in 41 sites, up seven on last weekend.

The Kid Who Would Be King added 100+ sites this weekend as the UK’s three major circuits (Cineworld, Odeon, Vue) hosted special kids’ screenings due to the school holidays, and its takings increased more than 100% to £39,805. It’s now up to £3.6m lifetime.