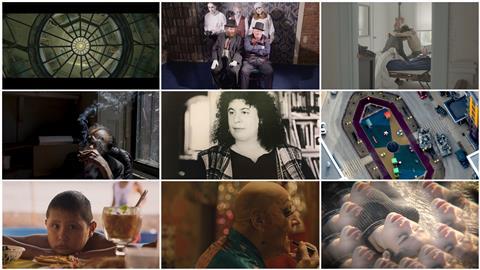 The UK’s Sheffield DocFest has selected nine films for its International Competition, with five of the documentaries making their world premiere at the festival. It runs from June 23-28.

The docs come from a broad span of countries - Australia, Brazil, Lebanon, Mexico, Poland, Spain, UK, US, and Ukraine.

The films in selection reflect the full spectrum of documentary production, from collective filmmaking on the frontline of war in the world premiere of Volodymyr Tykhyy’s One Day In Ukraine to the experimental exchange of video letters during the pandemic in the international premiere of Brazilian directors’ Fernanda Pessoa and Chica Barbosa’s Swing and Sway.

Some of the docs also use scripted narrative to portray true stories as in Mexican director Rodrigo Reyes’s Sansón And Me and Singing On The Rooftops from Spanish director Enric Ribes.

From the UK, Margareta Szabo and Kim Hopkins’s A Bunch Of Amateurs celebrates community and cinema and portrays the UK’s oldest amateur filmmaking club established in 1932 in Bradford, Yorkshire.

Two of the films selected - Pratibha Parmar’s profile of feminist writer and public intellectual Andrea Dworkin, My Name Is Andrea, and Swing And Sway - previously participated in MeetMarket, DocFest’s documentary pitching forum, while at the development stage.

A Bunch of Amateurs was part of Sheffield DocFest’s docs-in-progress showcase at the Marché du Film in Cannes in 2021.

“These nine powerful films reflect the wide range of documentary filmmaking,” said Zambrano. “They are distinctive in their approach and style and invite us to reconnect with the world in new ways. Each of these films invites audiences to engage with them; to be inspired and even challenged by the stories they tell.”

After the End of the World (Leb) World premiere
Dir: Nadim Mishlawi

Set among the constantly changing city of Beirut, this film explores the knowledge and history spaces can hold, and what happens when those spaces disappear.

A Bunch of Amateurs (UK) World premiere
Dirs:Margareta Szabo, Kim Hopkins
An affectionate tribute to silver screen dreamers that details a group of cinephiles and their attempts to save their amateur filmmaking club.

Man On Earth (Aus) World premiere
Dir: Amiel Courtin-Wilson
Sixty five years-old Bob has decided to end his own life after four years of living with Parkinson’s disease and surrounds himself with family and friends to say goodbye.

The Melt Goes On Forever: The Art & Times Of David Hammons (US) World premiere
Dirs: Harold Crooks, Judd Tully
A portrait of an African American artist who has steadfastly remained an outlier in the art world but whose work is seen as an essential commentary on race in the US.

One Day In Ukraine (Ukr-Pol) World premiere
Dir: Volodymyr Tykhyy
Media activist and filmmaking collective Babylon’13, formed during the Maidan uprisings, focus on the events of March 14, 2022 – the 2,944th day of the Russian-Ukrainian War.

Sansón And Me (Mex-US) International Premiere
Dir: Rodrigo Reyes
Rodrigo Reyes reconnects with Sansón, a Mexican migrant sentenced to life in prison, who he met when he was the translator at his trial.

Singing On The Rooftops (Sp) International premiere
Dir: Enric Ribes
The life of octogenarian Gilda, a drag-queen in Barcelona, changes dramatically overnight when they are asked to take care of an abandoned three-year-old girl.

Swing And Sway (Braz) International premiere
Dirs: Fernanda Pessoa, Chica Barbosa
Two filmmaker girlfriends – one in Brazil, the other in the US – send each other video letters, each inspired by a woman experimental filmmaker, over the course of one tumultuous year of the pandemic.