Song of My Mother triumphs at Sarajevo Film Festival 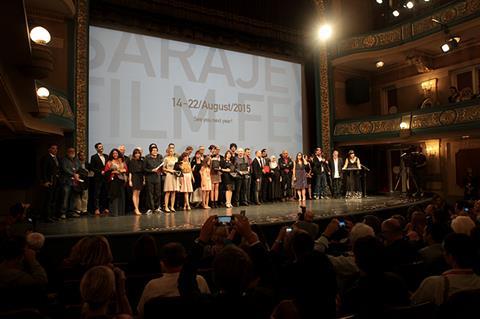 The 20th Sarajevo Film Festival (Aug 15-23) wrapped on Saturday night with Turkish writer-director Erol Mintaş ‘s first film Song of My Mother winning the main award Heart of Sarajevo for the best feature film and €16,000 provided by the Council of Europe.

A mother-son relationship film set among Kurds in Istanbul, it was finished in June thanks to the 1000 VOLT Post-Production Award the project won at the Istanbul Film Festival’s Meetings on the Bridge in April.

The Berlinale Panorama title Brides by Tinatin Kajrishvili won the Special Jury Prize and €10,000 from Agnes B., and first-timer Mari Kitia won the Heart of Sarajevo for best actress and €2,500.

In the documentary competition, Croatian director Tiha K. Gudac’s Naked won the Heart of Sarajevo for best film and €3,000 from the Swiss Federal Department of Foreign Affairs. The film world-premiered at the festival.

The Special Jury Prize (€2,500 provided by AI Jazeera Balkans) and the Human Rights Award (€3,000 from the Swiss Federal Department of Foreign Affairs) went to Eszter Hajdu’s Judgement In Hungary, winner at Prague One World Film Festival, Trieste and Wiesbaden.

A special mention was given to Tatjana Bozic’s Happily Ever After (Croatia-Netherlands), which received its world premiere at Rotterdam.

In the shorts competition, the German-Croatian co-production The Chicken by Una Gunjak won the Heart of Sarajevo for best film and €2,500.

It first screened in the Cannes Critics Week and later won the Jury Award for Best Live Action 15 Minute short at Palm Springs.

The jury gave out two special mentions, to Shelters by Montenegro’s Ivan Salatić, and The Execution by Petra Szőcs (Hungary-Romania).

The festival’s co-production market CineLink also revealed its awards at the ceremony.

The Eurimages Co-production Development Award worth €30,000 went to My Happy Family by Nana Ektimishvilli and Simon Gross. The directing duo’s previous film In Bloom won the Heart of Sarajevo for best film last year.

The CNC Award worth €10,000 was given to Pari by Iranian-born director Siamak Etemadi and producer Konstantinos Kontovrakis from Greece.

The team’s previous film The Lamb was in the main competition at Sarajevo this year.

Turkish producer Ipek Kent, who came to CineLink with the project 16 by director Melisa Önel, won the EAVE scholarship.

In the Works in Progress section, The Wounded Angel by Kazakhstani director Emir Baigazin and German producer Anna Vigelm received The Post Republic Award of €80,000 in services.

The team’s previous film Harmony Lessons won the same award at CineLink in 2012 and subsequently picked up the Berlinale Silver Bear.