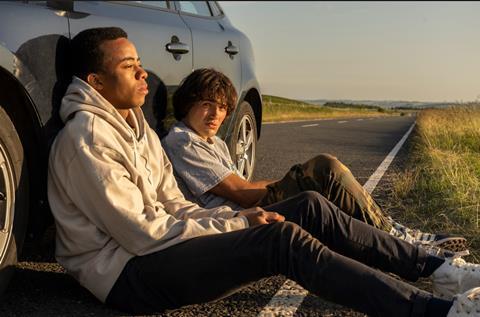 Independent Entertainment has boarded and will handle international sales on UK feature Black Dog, which brings together two of Screen’s 2022 Stars of Tomorrow, director George Jaques and  writer-actor Jamie Flatters.

Black Dog, which wraps principal photography this week, is directed by Jaques who also wrote the script with Flatters, with Flatters starring alongside Keenan Munn-Francis, who is making his feature debut.

Jaques is producing through Athenaeum Productions alongside Ken Petrie through 27 Ten Productions, with Ian Sharp and Flatters also producing. Trademark Films’ David Parfitt, whose credits include Oscar winner Shakespeare in Love and The Father, is executive producing.

Inspired by Jaques’ and Flatters’ childhoods, Black Dog is billed as a highly personal road movie set across the UK, about grief, love, sexuality and friendship.

Jaques and Flatters were both named this week as part of Screen’s Stars of Tomorrow 2022 cohort.

Jaques has worked as a writer, producer, director and actor on stage and screen. His writing has been performed at theatres including the National Theatre. Previous acting credits include Mark Munden’s The Third Day: Autumn and Death on the Nile. He will next be seen on screen as a lead role in The Serpent Queen for Starz and Sky’s A Town Called Malice.

Flatters’ recent acting credits include Netflix’s The Forgotten Battle, ITV’s Liar and NENT Studios’ Close to Me. He will be seen later this year as a lead in James Cameron’s Avatar: The Way of Water, and Paul Feig’s The School for Good And Evil.

Parfitt said: “As soon as I read Black Dog I knew I had to be involved. George and Jamie are exceptional talents and I’m very grateful that they have taken me along for the ride.”

Sarah Lebutsch, managing director of international sales at Independent Entertainment, added: ”We knew from the first time we met George that he was a force of filmmaking nature. True to form, he has assembled an extraordinary team both in front of and behind the camera, to help bring his and Jamie’s beautiful, touching story to life.”