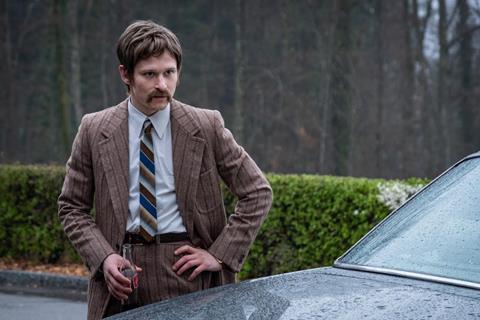 Switzerland’s Contrast Film has started production on its most ambitious feature film to date, Storm directed by Oliver Rihs.

Screen can reveal an exclusive first look image from the film, above.

Storm started shooting on April 1 in Switzerland, Germany and Spain. The nine-week shoot will wrap on June 12. In Switzerland, the production shoots in Zurich and in eastern and central Switzerland; in Germany it shoots in the Black Forest and in the studio at Ludwigsburg; and in Spain, in Almeria in Andalusia.

No international sales company is confirmed yet but discussions are ongoing.

Swiss actor Joel Basman stars. He was recently in Thomas Vinterberg’s Kursk and will next be seen in Terrence Malick’s Cannes Competition title A Hidden Life.

The story follows the idealistic lawyer Barbara Hug, fighting the antiquated prison system of the 1980s, who finds an unexpected ally in criminal and the “king of escapes” Walter Storm (Basman).

Madeo told Screen, “The film shows that even in Switzerland, which today is regarded as a modern and stable country, there were times when a repressive state and an inhumane penal system prevailed. This is hard to believe today, but in the 1960s and 1980s the masses took the streets to demonstrate against the fact that Swiss women were still not allowed to vote, unmarried cohabitation was banned, the police set up a mass surveillance system and the state kept secret files of the citizens. Today’s Swiss social state was hard-fought for: by idealistic lawyers, protesting youth groups, committed intellectuals. As utopian as their battle cries sounded, they were not in vain. Storm is an entertaining film, yes, but also a source of hope and motivation for many countries that still do not have human rights-compliant policies today.”