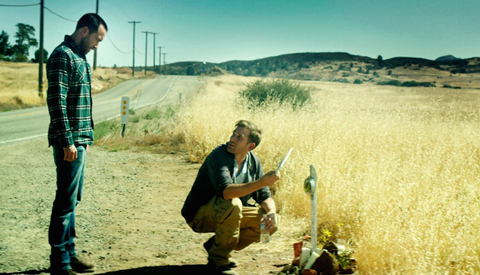 The US sci-fi horror thriller follows two brothers who return to visit what they believe to be a UFO death cult that they escaped at a younger age.

Benson and Moorhead also star and the innovative team has previously been noted for co-directing genre favorites Resolution and Spring.

The Endless made its world premiere at the Tribeca Film Festival and has been snapping up distribution deals since. Read about those here and here.

In its statement, the jury said, “A perfect combination of science fiction ideas translate to the screen with a strange naturalism and sometimes scary minimalism. Benson and Moorhead return to the ground of [their] first feature, Resolution, but this time the equilibrium between arthouse and genre objectives is perfect.”

Although the directors left Korea on Wednesday after a full schedule of screenings at BIFAN, they were told of their win “literally a couple hours before they had to leave”, according to programmer and NAFF head Thomas Nam.

In a video shot on the Bucheon City Hall lawn, the duo thanked the festival and jury with Moorhead saying, “This is our third year here at BIFAN and it’s been an unbelievable spectacle of films.”

They additionally noted there was only one trophy and two of them, so jokingly picked up a white dog saying they had been provided with a second prize, “BIFAN”, that they hoped would be behave well “on transatlantic flights”.

The festival has two more days of rush screenings on July 22-23.

BIFAN Children’s Jury Award
The Legend Of Timm Tyler Or The Boy Who Sold His Laughter (Germany) dir. Andreas Dresen