'The Predator' sets sights on 'The Nun' at international box office 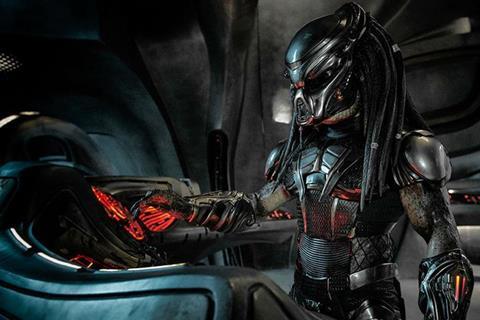 Fresh from its world premiere at TIFF, The Predator launches day-and-date with North America in approximately 70 territories this weekend via Fox International and looks ready to scrap it out for the box office crown.

If Shane Black’s horror reboot is to overhaul last weekend’s champion The Nun, however, it will need to deliver in the key markets of the UK, Germany, Australia, Brazil, Russia, South Korea, and Spain.

The Predator also ventures into Indonesia and Malaysia, India, Thailand, Taiwan, and Hong Kong, and Sweden and Holland, among others. Fox’s YA release The Darkest Minds has reached $27.7m.

Warner Bros Pictures International executives report that The Nun has crossed $100m and stands at $109.1m heading into its second session. The horror tentpole should hold well enough to push the running total toward, if not past, the $150m mark.

Walt Disney Studios Motion Pictures International brass report that Incredibles 2 has reached $574m, while Ant-Man And The Wasp stands at $398.4m, and Christopher Robin on $52.2m enters Australia and Japan this weekend.

This summer’s US documentary box office smash Won’t You Be My Neighbor? arrives in Australia, and Paolo Sorrentino’s three-hour version of Loro debuts in Italy, where the film has already opened as a two-parter. Todos Lo Saben opens in Spain.

The thriller Searching enters Australia and France and stands at $20.3m.