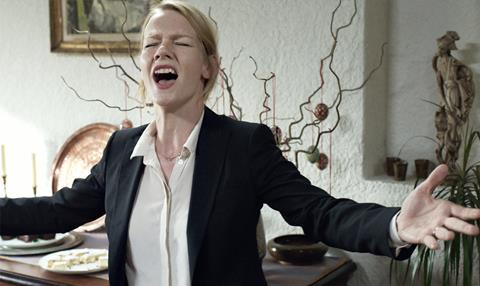 Toni Erdmann has been voted the best European film of 2016 at the European Film Awards in Wroclaw.

More than 3,000 members of the European Film Academy - filmmakers from across Europe - voted at this year’s awards ceremony.

The top prize for Toni Erdmann marked the first time in the EFAs’ 29-year history that the Best European Film award went to a female director as Maren Ade pointed out on accaccepting the evening’s final statuette with her partners Jonas Dornbach and Janine Jackowski of their production company Komplizen Film.

Swedish comedy drama A Man Called Ove was voted best European comedy, while there were also wins for Fire At Sea, The Happiest Day In The Life Of Olli Maki, My Life As A Zucchini and Land Of Mine, among others.

Three of last night’s winners are in the running to be nominated in the Best Foreign Language Feature Film Oscar: Toni Erdmann, My Life As A Zucchini, and The Happiest Day in the Life of Olli Mäki.

The awards ceremony before 1,200 guests in Wroclaw’s new Forum of Music was the most politically charged in the history of the event.

This had been anticipated, in part, following recent changes in the Polish political scene, but events elsewhere in Europe prompted many of the evening’s speakers to call on solidarity against the rise of nationalism and to stand up for the European idea and the preservation of artistic freedom.

Wroclaw’s Mayor Rafal Dutkiewicz set the tone for the evening with his opening address when he declared that “Europe is the future, nationalism is a thing of the past” and suggested that Europe should take a shower to rid itself of the “stinking sweat” of nationalism.

There was also the occasional sideswipe directed by the evening’s master of ceremonies actor Maciej Stuhr at the Polish national government in Warsaw (private Polish channel TVN, and not the national state broadcaster TVP, was handling the live transmission).

European Film Academy President Wim Wenders recalled the late Andrzej Wajda’s “civic and social responsibility” and “clear moral compass” when announcing the posthumous Honorary Award of the EFA President & Board for the filmmaker who had not been afraid to speak out against restrictive, retrograde government policies.

Meanwhile, the EFA’s continuing support for the 40-year-old Ukrainian filmmaker Oleg Sentsov, who is currently serving a 20-year sentence in a prison camp in eastern Siberia, was highlighted during the ceremony with the appearance on stage of one of the former Pussy Riot members, Maria Vladimirovna Aljoshina, who had herself served two years in a Russian prison for her actions.

The director’s I, Daniel Blake won the first European University Film Award (EUFA), a collaboration between the EFA and Filmfest Hamburg. Students from 13 European countries came together in Hamburg this week and selected Loach’s film from five nominated titles.

On announcing the winner in Wroclaw, Filmfest director Albert Wiederspiel revealed that the initiative had been so popular that it was likely that universities from no less than 20 countries would be participating next year.

The Film Awards also provided an opportunity for the Polish Film Institute (PISF) and two German regional funds, Medienboard Berlin-Brandenburg and Mitteldeutsche Medienförderung (MDM) to announce in Wroclaw that the German-Polish Film Fund will now have the German Federal Film Board (FFA) as a fourth partner, along with an increase in the initiative’s annual budget from €300,000 to €500,000.

The FFA’s participation in the initiative will now mean that the applications for script development can be accepted from producers throughout Germany rather than be restricted to companies based in the regions under the auspices of Medienboard and MDM.

Backing of up to €70,000 can be awarded for the co-development of a script by a German and Polish producer.

The Film Fund was originally launched as the German-Polish Co-Development Fund in 2005, but broadened its scope from last year with an increased budget to include support for film production as well.

As a rule, the maximum amount allocated for a co-production under this scheme is €150,000, and the backing can be accumulated with other production funding from German or Polish national and regional funds.

EUROPEAN COSTUME DESIGNER 2016
Stefanie Bieker
for LAND OF MINE