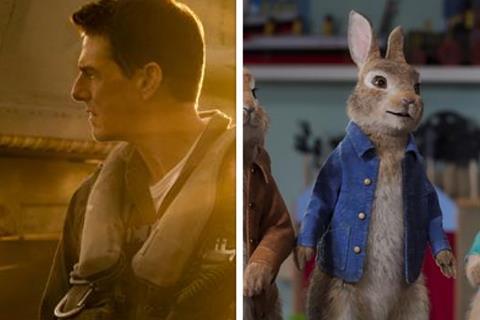 Amid ongoing cinema closures in Europe, Paramount announced a raft of tentpole moves on Friday (April 9), pushing Tom Cruise sequel Top Gun: Maverick from July Fourth weekend to November 19 this year in a calendar shuffle that prompted Sony to move Peter Rabbit 2 off the holiday weekend.

Paramount’s Maverick delay from July 2 means it bumped Mission: Impossible 7 from November 19 to May 27, 2022.

Studio executives are not taking any chances with Maverick, a major tentpole asset. In light of lockdowns and the slow vaccine rollout in Europe, they have opted to wait until cinemas in key markets reopen.

Following Paramount’s announcement, Universal moved The Forever Purge from July 9 to July 2, leaving it as the sole major theatrical release over July Fourth when, hours later, Sony said it was moving up Peter Rabbit 2: The Runaway from July 2 to June 18. Chris Pratt sci-fi The Tomorrow War will debut on Amazon Prime Video on July 2.

A Quiet Place Part II was not included in Friday’s announcement and at time of writing remained on May 28 Memorial Day holiday weekend. Universal’s big tentpole F9 is set for June 25, with Disney/Marvel Studios’ Black Widow to follow on July 9 in a simultaneous theatrical-Disney+ Premier Access launch in Disney+ markets.

G.I. Joe spin-off Snake Eyes moves up from October 22 to July 23 this summer, and Jackass is pushed from September 3 to open October 22 this year.

The Shrinking Of Treehorn will open on November 10, 2023, while Untitled Ryan Reynolds/John Krasinski Film is set for November 17, 2023.

All the latest changes:

The Shrinking Of Treehorn is announced for November 10, 2023 (wide).