John Curran’s Tracks, from The King’s Speech producer See-Saw Films, will have its world premiere as the opening night film of the Adelaide Film Festival on October 10. 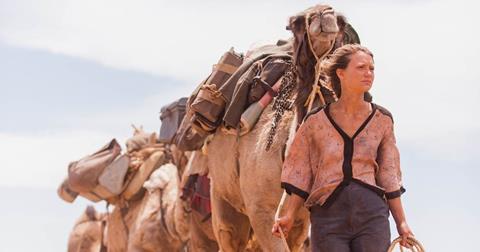 Based on an iconic book, the film tells the true story of author Robyn Davidson’s 1,700 mile trek from the middle of Australia to the Indian Ocean in the late 1970s.

Many fine actresses “came after” the role, Curran told ScreenDaily, but from the minute he met Mia Wasikowska he felt she had the ability to embody the complex and contradictory real-life character.

“There was something about her (Wasikowska’s) spirit … She’s very very smart and good at articulating ideas, which was remarkable to me at such a young age,” he said. “She is in practically every frame of the film and was on set every day in that heat, often miles away for the wide shots, managing on her own with four camels and a dog.”

Tracks was filmed over eight weeks in remote desert locations in South Australia and the Northern Territory and Curran said he got a lot of pleasure from working in that environment.

He is also very pleased that the last feature he expects to make using the medium of film – the transition to digital is a painful one for him, he said – took full advantage of Australia’s spectacular landscapes and light.

“I was determined that my last ever film using the medium of film would… not be some interior story set in an apartment somewhere.”

The producers of Tracks are Emile Sherman and Iain Canning from See-Saw Films, the production company that straddles Australia and the UK and also produced Oscar winner The King’s Speech. Julie Ryan and Antonia Barnard are the co-producers.

Tracks will be released locally by Transmission Films and handled internationally by Hanway Films and Cross City Sales.

US-born Curran lived in Australia for 20 years from 1984, and made his debut film Praise, which won the main critics award at Toronto, during this period. He directed We Don’t Live Here Anymore, The Painted Veil then Stone, before returning to Australia last year for Tracks. He will leave in a couple of weeks when the film is finished.

The Boy Castaways is another of the Australian world premieres that will be screening at the festival. It has grown out of the HIVE production fund, which goes to projects in which artists from different disciplines team up with filmmakers.