EXCLUSIVE: In a highly significant step for the region, Trinidad & Tobago has become the first Caribbean nation to join the Latin American Film Commission Network (LAFCN). 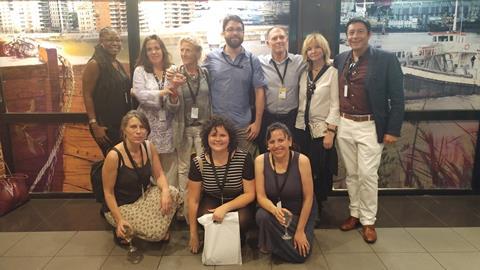 “Ventana Sur could be a game-changer for opening up opportunities for Trinidad & Tobago and Caribbean filmmakers in the Latin American market, and what’s exciting is that they are ready and willing to embrace us,” said Luke, pictured back row far left with LAFCN members including Aizenberg at third from left.

“As FilmTT works in the next few months to develop a strategic plan for the sector, the timing of this trip and these discussions was perfect to provide possibilities for the direction in which we take the industry, to the potential benefit of all involved. There’s a lot to follow up on in the coming days and months.

“Further, this potential for the film and audiovisual sector is also very much aligned to the ministry of trade and industry’s goal to advance trade relations with countries in Latin America, ensuring that our industry development can also benefit from macro-strategies to diversify the Trinidad and Tobago economy.”

The film industry in Trinidad & Tobago has been in formal development since 2006, a critical year that saw the establishment of the first film company, the creation of a degree course in film production at the University of the West Indies, and the founding of the Trinidad & Tobago film festival.

Since that time there has been a rise in number and quality of local films – five features were released this year and Luke reports there are now four tertiary-level educational institutes and a number of smaller programmes that offer some aspect of film education.

Beyond promoting Trinidad & Tobago as a film location and facilitating productions that shoot on the islands, Luke is a keen advocate of Caribbean talent and storytelling and wants to see collaboration across a region that has struggled historically to coordinate its entertainment industries.

The LAFCN was set up six years ago to support the audiovisual industries and production in South and Central America, Mexico and the Caribbean. Participating members are Argentina, Bolivia, Brazil, Colombia, Chile, Mexico, Paraguay, Peru, Uruguay, Ecuador and Trinidad & Tobago.

Within the last year the body has been recognised by the Council Of Latin American Film Authorities.