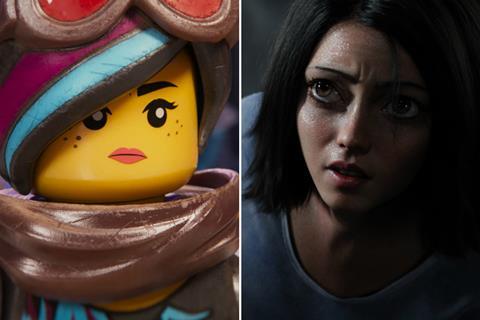 The story is set five years after the events of The LEGO Movie, with the citizens of the Lego universe facing the threat of Lego Duplo invaders from outer space.

Mike Mitchell, whose credits include Trolls and Shrek Forever After, directs this time, with first film directors Phil Lord and Christopher Miller as producers and writers.

It is opening alongside another animation, Fox’s Alita: Battle Angel. The film is based on Yukito Kishiro’s manga series Gunnm, and follows a female cyborg as she fights to discover who she is and change the world. James Cameron and Jon Landau are producers, with Cameron writing the screenplay with Robert Rodriguez and Laeta Kalogridis.

Alita is the first narrative feature Cameron has written and produced since 2009’s mega-hit Avatar, which he also directed.

Beale Street is a romantic drama based on James Baldwin’s novel of the same name, and has garnered awards nominations, especially for supporting actress Regina King and Jenkins’ screenplay. eOne us distributing in the UK.

Universal is releasing Boy Erased, directed by Joel Edgerton and starring Lucas Hedges, Nicole Kidman, Russell Crowe and Edgerton. Based on Garrard Conley’s memoir of the same name, it follows the son of Baptist parents who is forced to take part in a gay conversion programme.

Further openers include Kenneth Branagh’s story of Shakespeare’s final days All Is True starring Branagh, Judi Dench and Ian McKellan, by Sony; and Dogwoof’s documentary América, about brothers brought together to care for an ailing grandmother.