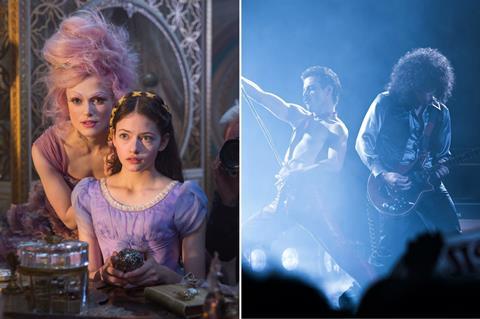 ‘The Nutcracker And The Four Realms’ / ‘Bohemian Rhapsody’

After Twentieth Century Fox’s Bohemian Rhapsody scored a strong opening at the UK box office last week, Disney’s The Nutcracker And The Four Realms heads the challengers looking to usurp it at the top.

Directed by Lasse Hallström and Joe Johnston, The Nutcracker is a retelling of E.T.A. Hoffmann’s short story The Nutcracker And The Mouse King and Marius Petipa’s The Nutcracker Ballet. Mackenzie Foy stars as Clara, the young girl who finds a nutcracker doll which comes to life, with further cast including Keira Knightley as the Sugar Plum Fairy and Helen Mirren as Mother Ginger.

Recent fantasy title The House With A Clock In Its Walls opened to a £2.3m weekend (£3.4m including previews) in September; as of last weekend it was up to £8m after six weeks.

There is an appetite for the Nutcracker story at the UK box office, with regular productions of the ballet screened at venues across the country. Most recently, the Royal Opera House 2017/18 production opened on 470 screens in December last year and grossed £1.2m total. There have also been four productions of the Bolshoi Ballet’s The Nutcracker performance streamed between 2011 and 2017 through Trafalgar Releasing, with the 2014 version scoring the best result of £539,212.

Bohemian Rhapsody heads into week two with £9.5m already in the bank. In terms of 2018 musical film comparisons, fellow Fox title The Greatest Showman dropped just 7% on its second weekend to take £2.4m and a £10m cume, while Mamma Mia! Here We Go Again dropped 27% for a £7.1m three-day and huge £27m cume. Any drop between those two would represent a decent result for Fox.

Mike Leigh’s Peterloo, a historical drama about the Peterloo massacre when a peaceful protest was attacked by government forces in Manchester in 1819, starts its run this weekend. Leigh’s most recent film, Mr Turner, opened to £904,947 on almost exactly the same date (Oct 31) in 2014, and went on to an impressive £7m cume, assisted by awards buzz for Leigh and lead Timothy Spall. Last month Peterloo had its UK premiere as the first BFI London Film Festival gala premiere to take place outside of London, with the event at Manchester’s HOME venue live-streamed to cinemas around the UK.

Universal has Jesse Peretz’s Sundance comedy Juliet, Naked starring Rose Byrne, Chris O’Dowd and Ethan Hawke opening. The film started its US run in August and has $3.4m (£2.8m) there to date.

Dogwoof has Khalik Allah’s documentary Black Mother – an ode to his native Jamaica – opening in select locations; the film launched at True/False Film Festival in March and has also played at events including CPH:DOX and Sheffield Doc/Fest.

There is also a limited release of Clare Anyiam-Osigwe’s race drama No Shade through BUFF Originals; the film opened the British Urban Film Festival (BUFF) back in June of this year. Anyiam-Osigwe becomes only the sixth black British female director to have a feature film released in UK cinemas, according to the distributor.

National Amusements will release Mamoru Hosoda’s Japanese animation Mirai, which premiered in Directors’ Fortnight in Cannes in May; while Cosmic Cat will release doc Nae Pasaran!, about a group of Glasgow factory workers fighting fascism in the 1970s.

Key holdovers include the so-far impressive run of A Star Is Born, and titles which may have benefited from the seasonal celebrations including Universal’s Halloween and Sony’s Goosebumps 2: Haunted Halloween.