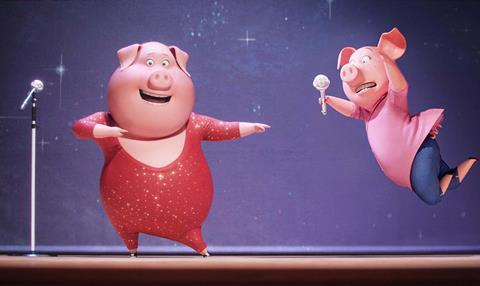 Despite a fall of around 40% (excluding previews), Sing managed to comfortably retain the top spot at the UK box office.

As it did this weekend, The Lego Batman Movie will provide some family competition, but with the upcoming school holidays, there’s more than enough room for the two of them.

Loving opened with a somewhat soft $292,000 (£234,183) from its 189 sites, behind both Midnight Special and Mud in terms of Jeff Nichols’ openings. It will hope to rebound midweek, but it’s a busy market for older-skewing films at the moment.

Though it won’t be officially counted until next week, Warner Bros’ The Lego Batman Movie assembled $3.05m (£2.44m) from its two days of previews.

La La Land is now Lionsgate’s fourth highest-grossing release of all time in the UK, behind the three Hunger Games sequels.

Entertainment’s Best Picture nominee is now up to $6.23m (£5m) after adding more than $1m (£800,000) across its second Mon-Thurs session, despite the competition from other awards contenders.

Paramount’s threequel did at least win the battle of the new horrors by some distance ahead of Resident Evil, but its opening is less than half that of the previous two Ring outings in the UK.

Event cinema fans had two releases to enjoy this weekend thanks to Picturehouse Entertainment.

Director Stephen Gaghan’s previous outing, Syriana, posted a UK bow of $1.08m (£863,175) from its 236 sites, but did benefit from the heavyweight presence of George Clooney and Matt Damon.

Oscar Best Foreign Language Film favourite Toni Erdmann is off to a strong start at the UK box office.

Critical acclaim and awards recognition should see the film enjoy sturdy holds over the coming weeks.

This week sees saturation releases for Warner Bros’ The Lego Batman Movie, Universal’s Fifty Shades Darker and Entertainment’s The Space Between Us.