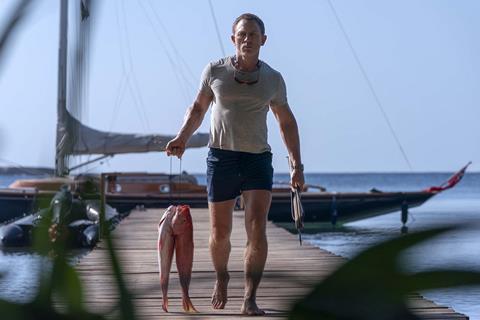 UK and Ireland box office takings for 2021 have passed the total for the whole of 2020 with 11 weeks remaining in the year.

Earlier this week Comscore reported that box office was running 3% ahead of 2020 numbers at the same stage in the year. Cinemas were closed for much of the final two months of 2020 due to the second lockdown.

For 2021, total box office was at £254m up until September 30; the subsequent release of Universal’s James Bond blockbuster No Time To Die, which took £52.6m in just 11 days, has given figures a significant boost.

The 2021 figures have been steadily catching the same-stage 2020 numbers throughout the year, tracking 84% down in the week beginning June 4 after four weeks of releases; narrowing that to 39% after eight weeks of releases; and standing just 16% behind as of the week beginning September 24, after 20 weeks. No Time To Die figures for September 30 were counted as previews ahead of the October 1 first weekend, and not included in that latest number.

These are welcome milestones for the exhibition industry’s recovery, demonstrating that audiences are bigger now than in the windows when cinemas could open during 2020.

It is even more impressive given that all cinemas in the territory were required to close for five months at the start of the year, opening in England, Scotland and Wales from May 17; and in Northern Ireland and Ireland from June 7.

Once they did reopen, distancing measures remained in place for several weeks; while cinemas in Ireland are still required to operate at 60% capacity maximum.

In 2020, cinemas were open for two-and-a-half months at the start of the year prior to the pandemic taking hold. Venues were then closed from mid-March until July; then again for November; and for a third time at the end of December. Distancing measures were also in place for much of this time. While an exact comparison is difficult due to varying opening dates, cinemas were open for about 33 weeks in 2020, compared to 21 weeks so far in 2021.

Cinemas will look to push 2021 numbers even higher in the remainder of the year, with a packed schedule of wide release titles including Sony’s Venom: Let There Be Carnage on Friday, October 15; Warner Bros’ Dune on October 22; STX’s Spencer on November 5; Sony’s Ghostbusters: Afterlife on November 18; and Disney’s West Side Story on December 10.