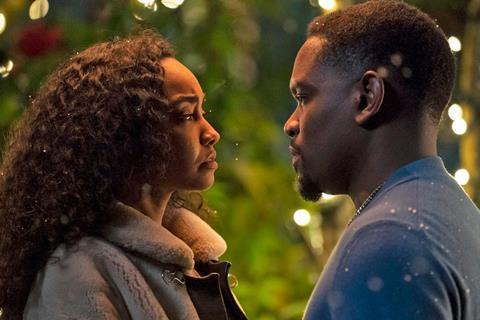 Aml Ameen’s romantic comedy Boxing Day heads the new titles at the UK-Ireland box office, as one of six Christmas-themed releases this weekend.

Released in 439 sites through Warner Bros, Boxing Day is inspired by Ameen’s own experiences, and follows a UK author who returns home from Los Angeles to introduce his US fiancée to his eccentric British-Caribbean family at Christmas.

The film is produced by Screen Star of Tomorrow 2020 Joy Gharoro-Akpojotor, alongside Damian Jones of DJ Films, plus Ameen, Dominique Telson and Matthew G. Zamias; backing came from the BFI Film Fund and Film4.

The film shot in winter 2020, having gone from pitch to greenlight without the Film4 team ever physically meeting the filmmakers, due to the pandemic.

Ameen was a Screen Star of Tomorrow under the Brits in LA banner in 2013; his cast also includes Screen Stars Tamara Lawrance (2018), Yasmin Monet Prince (2020) and Sheyi Cole (2020), while casting director Isabella Odoffin and production designer Gini Godwin were Screen Stars in 2019 and 2021 respectively.

Christmas-themed films are a reliable draw for cinemas, although releases can suffer from the amount of competition at this stage of the year – a factor that will increase this year, with several major releases delayed from 2020 due to the pandemic.

Richard Curtis’ 2003 Love Actually is the highest-grossing film in the territory with a direct festive subject, having opened to £6.7m and gone on to a massive £36.8m. The film also benefits from regular bookings every year as part of seasonal programming.

Gharoro-Akpojotor and Jones previously collaborated on 2019’s Blue Story, directed by Rapman, which opened to £1.3m, closing on a decent £4.5m.

The highest-grossing film from a Black director in the UK and Ireland is Ryan Coogler’s Black Panther with £50.8m in 2018; while the peak from a Black British director is Steve McQueen’s Oscar-winning 12 Years A Slave, with just over £20m in 2014.

It is the debut feature of UK filmmaker Camille Griffin and produced by Celine Rattray and Trudie Styler for Maven Screen Media, alongside Matthew Vaughn for Marv Films. 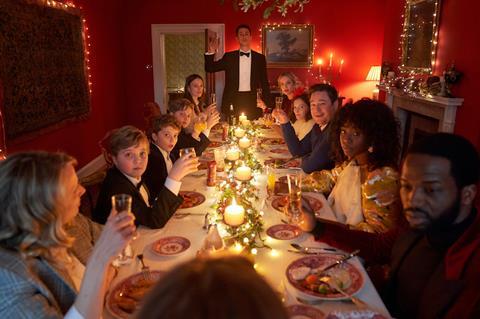 It debuted as a Gala Presentation at Toronto Film Festival in September, going on to genre events at Fantastic Fest and Sitges.

Modern Films is distributing the CBeebies Christmas Show 2021: The Night Before Christmas in 505 sites – a significant increase on the site numbers for the previous two shows, which Modern opened in 314 sites in 2019 and 388 in 2018.

Those titles grossed £154,410 and £212,629 respectively; Modern will be looking to surpass that with the wider release.

Christmas is also found in the non-English language sector, with Michal Rogalski’s Polish comedy To Musi Byc Milosc (literally, It Must Be Love) through Magnetes Pictures; and in event cinema, with Christmas With Andre, the latest concert from Dutch violinist Andre Rieu, in 558 sites through Piece Of Magic Entertainment.

Having seen Venom: Let There Be Carnage and Ghostbusters: Afterlife perform well in recent months, Sony is opening Resident Evil: Welcome To Raccoon City in just over 280 locations.

It is a reboot of the action-horror series based on a Japanese video game franchise of the same name. The highest-grossing of the original six films was 2010’s Resident Evil: Afterlife 3D, which opened to £1.7m and closed on £4.8m. Screen Star of Tomorrow 2008 Kaya Scodelario leads the cast of the latest title.

Universal has two releases this weekend. Justin Chon’s Blue Bayou is coming out in 115 sites; the film, starring Chon and Alicia Vikander, centres on a Korean-American man raised in the Louisiana bayou who must confront his past when he is threatened with deportation from the only country he knows.

The studio is also releasing late documentarian Luke Holland’s Final Account, a documentary about the last living generation of the Third Reich, the German state under the control of Adolf Hitler from 1933 to 1945. The film played previews in 25 Picturehouse sites on Thursday, before opening in seven locations from today (Friday). Odeon are then playing one-off screenings in 35 sites on Monday, December 6; a total of 85 sites are playing the film across its first week.

Several films around the awards conversation make their debut this weekend. Entertainment Film Distributors is releasing Mike Mills’ black-and-white drama C’mon C’mon, starring Joaquin Phoenix as a radio journalist who embarks upon a cross-country trip with his young nephew.

Phoenix is in contention for acting awards for his lead role; and also acts as a strong box office draw, having led Joker to a huge £58.3m in autumn 2019.

Netflix, which does not share number of locations or box office takings for its films, is releasing Paolo Sorrentino’s The Hand Of God this weekend. The semi-autobiographical film, which debuted in competition at Venice in September, tells the story of a boy in Naples during the 1980s.

Sorrentino’s highest-grossing title in the UK and Ireland to date is 2013’s The Great Beauty, which took just over £1m after a £118,175 opening.

Curzon is releasing Encounter, the second feature from Beast director Michael Pearce, in 30 locations. Starring Riz Ahmed, Rory Cochrane and Octavia Spencer, it is a sci-fi thriller about two brothers on a journey with their father, who is trying to protect them from an alien threat.

Disney is distributing Bollywood romance Tadap in 65 sites; while New Wave Films has Mohammad Rasoulof’s Berlin 2020 title There Is No Evil in seven locations.

Magic Light Pictures is playing family animations The Gruffalo’s Child and Stick Man in 94 sites; while Warner Bros is re-releasing sci-fi blockbuster The Matrix in 375 locations, ahead of the latest instalment in the franchise on December 22.

Key holdovers include last week’s number one House Of Gucci, plus Ghostbusters: Afterlife, and Disney’s Encanto and Eternals.