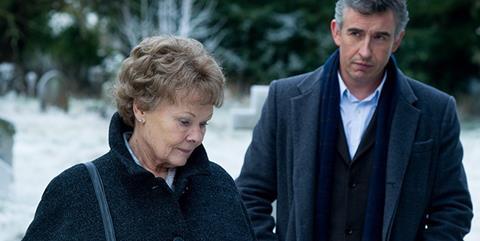 The 57th BFI London Film Festival (Oct 9-20) has announced that the festival’s American Express Gala will be the UK premiere of Stephen Frears’ Philomena.

Based on true events, Judi Dench plays the title role alongside Steve Coogan as journalist Martin Sixsmith.  The screenplay was written by Coogan and Jeff Pope, based on the book The Lost Child of Philomena Lee by Martin Sixsmith.

Dench plays an Irish woman seeking the son she was forced to give up for adoption 50 years ago. Coogan plays the reporter who helps her.

Frears, best known for directing The Queen, High Fidelity and Dangerous Liasons, is expected to attend the gala screening with Dench and Coogan.

“Stephen Frears demonstrates his customary flair for extracting brilliant performances and balancing cogent wit and deep pathos while Judi Dench and Steve Coogan adroitly navigate the tonal shifts between drama and humour and imbue their real-life characters with depth and dignity,” she added.”

The Weinstein Company paid around $6.5m for US, Canadian and Spanish rights to the drama at the Cannes Film Festival in May.

The London Film Festival will open with Paul Greengrass’ hijack thriller Captain Phillips on Oct 9 and will close with Disney’s Saving Mr Banks on Oct 20. Both star Tom Hanks.

The full programme will be announced next Wednesday [Sept 4].