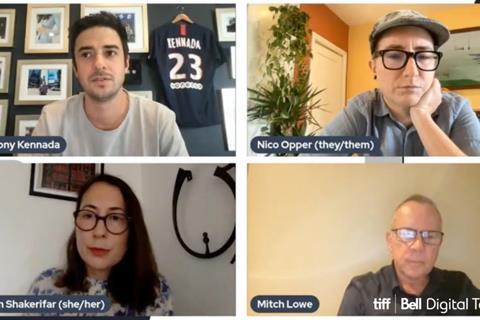 UK filmmaker Elhum Shakerifar exchanged views with former MoviePass CEO Mitch Lowe about the pros and cons of digital platforms on a TIFF panel on Monday (September 13) and warned that algorithms prevented films that are hard to categorise from being seen.

Speaking during MICROSESSIONS Accessing Digital Content and the Future of Film Shakerifar said in her work as BFI London Film Festival programme advisor for Iran and the MENA region she has seen algorithms reinforce stereotypes when making recommendations to viewers.

“If you look up reviews of many of the Iranian films that have been released this year most of them spend most of their time talking about censorship in Iran and politics in a way that is absolutely irrelevant to the film,” she said. “People go in with these pre-expectations… With algorithms and platforms and the way things are being directed to [people] we play into stereotype a lot and that’s why there are so many films that don’t get seen because they’re too challenging for the stereotype.

“We’ve created this notion that we flatten things in order that they can be bite-sized and understandable and that’s something we can reverse and challenge and move away from.”

Her comments came after Lowe, an executive in the early says of Netflix and president at Redbox, said technology had expanded people’s ability to watch content and claimed he would walk out of cinemas “almost in tears” prior to the advent of platforms and their vast appetite for content knowing that niche acquisition titles might never get acquired or seen.

“This is why film festivals are so important,” said producer Nico Opper who produced Try Harder!, a documentary that premiered at this year’s virtual Sundance FIlm Festival. “We were thrilled and devastated: thrilled to be Sundance and devastated that it was all online. [We] very quickly came to accept it and then celebrate the fact that so many more people were going to see [the film] this way and access was wide open.

They continued, “They allowed something like 5,000 people into each online screening and nobody had to buy a ticket to Park City and worry about financial access – it was affordable and equitable.”

Lowe spoke of “cross-pollination” of content on platforms such as the popularity of Mexican telenovelas in China and South Korea and Indonesian documentaries in France and opined, “We’re getting exposed and having this access to content we never would have had a chance to watch in the past

Shakerifar – who was named on Screen’s Brit 50 list in 2018 – pushed back. “I agree we wouldn’t have access to [some content] but I also think we’re looking at things slightly differently because there has always been Turkish telenovelas or Egyptian golden age cinema watched across the region of the Middle East,” said Shakerifar. “There have traditionally always been these crossovers, they’ve just maybe not been looked at in the same way… it goes back to the notion of what discovery is. There are lots of thing that were already there, it’s how we talk about them.”

The UK producer of 2015 Bafta-nominated A Syrian Love Story, 2018 A Northern Soul and 2020 Syria-set Ayouni also cautioned about over-reliance on English language, which she said was a barrier to access for non-speakers, and highlighted the lack of meaningful compensation to filmmakers once a streamer acquired their work.

“There’s never been fairness or equity in compensation for artists [except for] a few,” noted Lowe. “Everything that we did when we founded Netflix and everything I tried to do at MoviePass was to expand people’s consumption and drive more dollars into independent film. We spent $400m in tickets over a six-month period and almost all of that was going to independent films.”

The now defunct cinema-going subscription service MoviePass launched in 2011 and hit the headlines in 2017 when it lowered its monthly cost and offered members unlimited tickets for $9.95 a month. The company paid full cost for tickets and did not expect consumer adoption to soar. The model became unsustainable and MoviePass, owned by analytics firm Helios + Matheson, ceased to exist in 2019. In June the Federal Trade Commission found MoviePass deceived customers and tried to make the service difficult to use in order to cut costs.