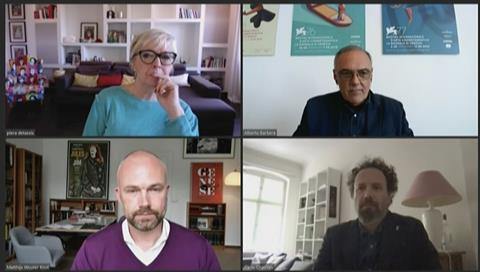 The growing backlog of films awaiting release and the challenges of online events came under the spotlight in a discussion with the directors of the Venice and Berlin film festivals.

The ongoing impact of the pandemic on film festivals and productions were highlighted by artistic directors Alberto Barbera of the Venice Film Festival and Carlo Chatrian of the Berlin International Film Festival at the 10th Incontri conference, hosted virtually by Italy’s IDM Film Fund and Commission.

“There are many films ready and all of them are expecting the specific kind of promotion that can only come from festivals, physical festivals” said Barbera, who safely staged a physical Venice last September between lockdowns.

“The role of festivals increased and is going to increase even more. What we’ve learned in this past year and a half is that you can have an online edition with a wider audience, but this doesn’t mean you get the same promotion.”

Chatrian is preparing for a public, Summer Special edition of the Berlinale, after helping oversee an industry-only, online edition of the festival in March.

“If festivals have a role, it is to put a flag on films,” said the artistic director on the importance of promotion in the life of a film’s release. “We reduced our programme by more than half this year but I don’t think it will be possible in the future.

“Berlin has millions of citizens; we need many movies. We’ve learned though that we need to simplify. This doesn’t mean cutting sections but keeping it simple and maintaining the identity of each of them… I don’t know what will happen with the pandemic for the 2022 edition, we’re exploring all possibilities”.

“Platforms need a huge amount of content… and they need tools to orient audiences in making a choice regarding what they want to see,” said the Venice director. “I think a festival’s selection is the best way to underline the interest in certain titles. This is why platforms don’t skip festival appointments and invest money in the production of films from well-known and reputed filmmakers. They need the recognition and promotion that can only come from festivals.”

“It will be crucial to create a better impact for awards,” said the EFA director. “If we create the possibility for audiences to see and enjoy the films before the awards are given, it will work, but this requires the collaboration of distributors, exhibitors and sales agents.”

“Something has changed forever,” said Detassis, who oversaw the 66th David di Donatello ceremony earlier this month, which was held physically but split over two different locations. “Though we will go back to a physical show it won’t be the same.

”The choice I made at the beginning of my presidency is to work all of the year… I think the future is easier to predict for festivals than for awards ceremonies. We need to set up a longer mission and work to communicate cinema in many different ways.”

Knol added that film education was essential to ensure “younger audiences get to see great films, making sure larger audiences in Europe have access to films that have premiered in festivals, in cinemas or on the platforms.”

The IDM Film Fund & Commission works in the South Tyrol region, a bilingual area of Italy at the border with Austria and Switzerland, and has helped forge connections between productions in Germany, Italy, Austria, and Switzerland since 2011.