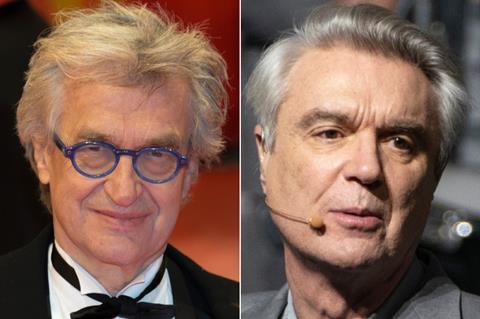 A new anthology series titled This Is Music from directors including Wim Wenders and David Byrne is one of 10 international projects selected for the Co-Pro Series section of the Berlinale Co-Production Market 2021 (March 2-5).

The Berlinale Series has also selected six series to play in the online festival, which runs from March 1-5.

Produced by Norway’s Oslo Pictures, anthology series This Is Music is created by Bjørn Olaf Johannessen, who wrote Wenders’ 2015 Berlinale feature Every Thing Will Be Fine. Julie Andem (writer on hit Norwegian series Skam) and Louder Than Bombs filmmaker Joachim Trier will also direct segments alongside Wenders and Byrne.

Also selected for the Co-Pro Series is Balaton Brigade, to be directed by Ildikó Enyedí, the Hungarian director whose 2017 film On Body And Soul won the Golden Bear and went on to be nominated for the international feature Academy Award. Balaton Brigade is produced by Hungary’s Joyrider and Film Force.

The Co-Pro Series pitches will take place online on March 2, hosted by the Norwegian Film Institute. Creators will then hold online meetings with potential partners.

The six titles in this year’s Berlinale Series represents a smaller selection than last year’s eight.

Among them are the first documentary work to play in Series – Ted Passon, Yoni Brook and Nicole Salazar’s US title Philly D.A., about the efforts of Philadelphia District Attorney Larry Krasner to reduce the city’s incarceration levels. It is produced by Josh Glenn and Michael Gottwald of US firm Department Of Motion Pictures; the pair were previously Oscar-nominated as producers of drama feature Beasts Of The Southern Wild in 2013. With eight 54-minute episodes, Philly D.A. is premiering at Sundance before its European bow in Berlin.

Also playing is Russell T Davies’ It’s A Sin, about a group of young queer men in 1980s London as the AIDS crisis is beginning to take hold. Executive produced by Nicola Shindler for Red Production Company (before her departure from the firm to form Quay Street Productions), it debuted on Channel 4 in the UK on January 23.

Those chosen include UK series Finding Alice, also produced by Red, starring Keeley Hawes, Joanna Lumley and Nigel Havers in the story of a woman faced with a storm of secrets after her husband dies shortly after they move to a new house. Studiocanal is handling world sales.

Conference topics include a masterclass on ‘Social Impact Storytelling’ from Maurício Mota, producer of US series East Los High; and a presentation on global narrative trends from Guy Bisson of data research firm Ampere Analytics.

The full Series Market and Conference programme will be announced next month.

Until I Find You (Can) dir: tbd, scr: Kaleena Kiff, based on the novel by John Irving, prod: Big Blue, The Netherland & Curiosity Pictures,

Project in partnership with Series Mania:

Me And The Others (Austria-Ger)

Creator: David Schalko
Dir:: David Schalko
Cast: Tom Schilling, Lars Eidinger, Katharina Schüttler, Sophie Rois, Mavie Hörbiger, Martin Wuttke
Broadcaster: Sky
Six episodes of 40’
What is the relationship between “I” and “the others”, and what would change if you could define the rules of the game at will? David Schalko’s absurd satire explores these questions with razor-sharp dialogue and a delight in escalation.

The Last Days of Gilda (Bra)

Creator: Mette Heeno
Dir: Anna Zackrisson
Cast: Josefin Asplund, Eva Melander, Maria Rossing, Ardalan Esmaili, Cecilia Nilsson
Broadcaster: SVT, DR
Six episodes of 58’
The disappearance of a five-week-old baby at Christmastime plunges the child’s mother Jenni into despair and brings police officer Alice onto the scene. The two are not the only ones whose lives are touched by the case.

Creator: Anastasia Volkova
Showrunners: Valeriy Fedorovich, Evgeniy Nikishov
Dir: Andrey Dzhunkovskiy
Cast: Alina Gvasaliya, Aleksey Rozin, Ekaterina Vilkova
Production company: 1-2-3 Production
Broadcaster: TV-3
World sales: 1-2-3 Production
Episode 1 of 8
Teenage girl Alice lives in a small town where everything seems ordinary at first sight. She can’t wait to get away from it: the bullying at school, the fights with her mother - and the bloody premonitions that keep haunting her. But what if there is no way to leave?

Dir: Roger Goldby
Cast: Keeley Hawes, Joanna Lumley, Nigel Havers
Production company: Red Production Company
Broadcaster: ITV
World sales: Studiocanal
Episodes 1 and 2 of 6
The night Alice and her family move into the dreamhouse her husband Harry built, he has a fatal accident. His sudden death kicks up a storm of secrets, debt and suspicion which Alice is forced to confront in order to survive.

Creator: Leonardo Fasoli, Maddalena Ravagli
Dir: Gianluca Maria Tavarelli
Cast: Alessandro Gassman, Maya Sansa, Andrea Sartoretti
Production company: Publispei
Broadcaster: RAI
World sales: ZDF Enterprises
Episodes 1 and 2 of 8
An ex-police officer investigates into his estranged son’s alleged suicide. With the help of old allies and facing the demons of his past, he risks everything to keep the promise he made to his only child.

Son Of Mine (Can)

Creators: Michel D’Astous, Anne Boyer
Dir: Mariloup Wolfe
Cast: Antoine L’Écuyer, Élise Guilbault, Patrice Godin
Production companies: Quebecor, Duo Productions
Broadcasters: Club Illico, TVA
World sales: Oble
Episode 1 and 2 of 6
Eighteen-year-old Jacob’s life is shattered by the sudden onset of schizophrenia. His once-bright future is irretrievably shaken by this unforgiving mental illness. As is his mother Marielle’s life, who won’t give up on her son and is determined to help him to get onto the road of recovery.

Creator: Henriette Steenstrup
Dirs: Gunnar Vikene, Charlotte Blom
Cast: Henriette Steenstrup, Nils Ole Oftebro, Gunnar Eiriksson
Production company: Monster Scripted
Broadcaster: Viaplay
Worldsales: TBA
Episodes 1-3 of 6
Pørni has two daughters, an irresponsible ex, a father and a nephew she took in after a family tragedy, a job in child welfare and a house and garden. Why would she have trouble finding time for herself - especially her love life?

Dir: Miriam Guttmann
Production company: De Familie Film & TV
Broadcaster: VPR
World Ssales: Dogwoof
Episodes 1-3 of 3
Documentary Form
Dr. Karbaat, a pioneer in artificial insemination, became subject to controversy when evidence accumulated that he used his own semen for the process. The documentary series portrays the shocking revelations and the people whose lives were affected by this.