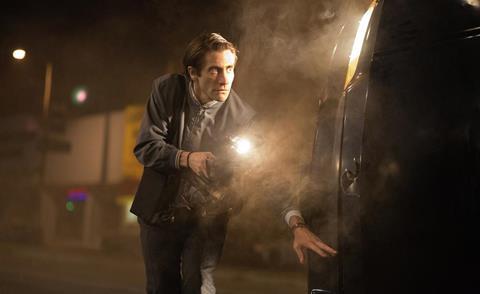 In Nightcrawler, Jake Gyllenhaal gives a fully invested, gutsy performance as a morally slippery Angeleno who stumbles into the shadowy world of nighttime freelance news videographers. Unfortunately, filmmaker Dan Gilroy’s tonally bold directorial debut can’t quite pull together its differing ambitions, resulting in a story that’s not entirely satisfying as a dark character study, amoral thriller or curt commentary on the sensationalism of local TV news.

Gilroy and cinematographer Robert Elswit have given us a lurid portrait of nighttime L.A. that hums with raw dread, but Nightcrawler can’t execute its story as effectively as its pungent mood.

Screening at the Toronto Film Festival before hitting US theatres on October 31, this Open Road offering will benefit from Gyllenhaal’s modest box office appeal and its thriller trappings. But because the likeable star plays a quietly sinister, mentally unstable man, Nightcrawler may suffer some in terms of word of mouth. Still, praise for Gyllenhaal’s controlled turn may make this movie an attractive counterprogramming option for those who will want to ditch the late-October glut of horror films.

Set in Los Angeles, Nightcrawler stars Gyllenhaal as Lou Bloom, who is stealing raw materials from a construction site and overwhelming a security guard when the movie begins, an ominous warning about the sort of individual we’re dealing with. A drifter without much direction but armed with a fierce determination to make something of himself, Lou is looking for a job when he happens upon a fiery car accident on the freeway.

While the cops try to rescue the driver, Lou notices Joe (Bill Paxton), a man with a video camera who swoops in to record the incident. Joe explains that he’s a “nightcrawler,” a freelance videographer who films horrible car crashes and bloody murder scenes, selling the footage to local news stations that can’t get enough grisly material. Intrigued, Lou decides to become a nightcrawler as well, hiring a well-meaning, oblivious young man named Rick (Riz Ahmed) to be his assistant as they drive around L.A. with their police scanner looking for potentially horrifying footage.

Gilroy, best known as a co-writer on The Fall and The Bourne Legacy, has built his movie around Lou’s puzzling, intriguing strangeness. Decked out with big bushy eyebrows, Gyllenhaal speaks in an unsettlingly low tone, trying to sell himself as a confident, put-together man who nonetheless lets his façade drop occasionally so that we see the true unease within him. With echoes of Robert De Niro’s performances as unhinged people on the margins in Taxi Driver and The King Of Comedy, Gyllenhaal digs deep into Lou’s misanthropy and need to belong — qualities that, ironically, make him an ace nightcrawler because he’s willing to get shots that no one else will, even if it pushes up against the boundaries of taste or ethics.

The problem with Nightcrawler is that Gilroy has created a vivid world of lowlifes and losers without always making that world convincing. Most notably is his depiction of the local news station that soon becomes Lou’s bread and butter. Rene Russo plays an unscrupulous news editor who embraces the “if it bleeds, it leads” ethos of bottom-feeding sensationalist journalism. Russo gives the woman enjoyable layers of sliminess, but Nightcrawler consistently seems overly pleased with its ho-hum revelations about TV journalism that aren’t particularly shocking. This is even more of an issue when it becomes clear relatively early on that Lou’s rise up the nightcrawler ranks is meant to be a scathing, deadpan indictment of an industry so soulless and corrupt that it embraces a psychopath like him.

The film works best in its exchanges between Lou and Rick where we see the depths of self-delusion eating into Lou’s personality. Intimidating the younger, impressionable Rick, Lou rules the roost in their nightly drives around L.A., and as his actions become increasingly ethically questionable, Nightcrawler creates a claustrophobic unreality between them. The two actors have a chilly rapport that’s apt for their relationship as the audience (along with Rick) slowly begins to understand the depths of Lou’s depravity.

About two-thirds of the way through Nightcrawler, Gilroy throws a major twist into the narrative, shifting the film away from character study into the realm of thriller. The filmmaker does a fine job increasing the tension, leading to a few expert action and suspense sequences, but it doesn’t fit smoothly into what comes before — and it segues awkwardly into a finale that proves too predictable in terms of Lou’s ultimate arc. Gilroy and cinematographer Robert Elswit have given us a lurid portrait of nighttime L.A. that hums with raw dread, but Nightcrawler can’t execute its story as effectively as its pungent mood.