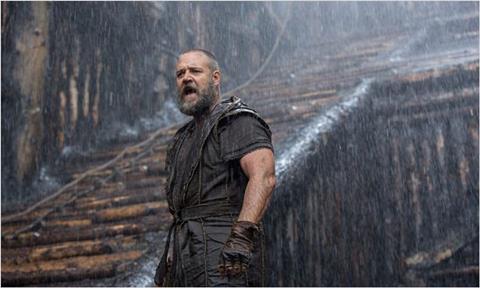 Throughout his career, director Darren Aronofsky has made movies about obsessive, potentially self-destructive characters: Think of the driven mathematician of Pi or the demented ballerina of Black Swan. So it should be no surprise that his latest, Noah, zeroes in on a protagonist whose best intentions threaten to lead him into madness. Unfortunately, that emotional through-line gets lost amidst an oversized epic that juggles too much and doesn’t do enough right.

While it’s laudable that Aronofsky has aspired not to depict a disaster story but, rather, flesh out a personal epic about redemption and new beginnings, Noah is far too impersonal to register.

Intermittently enlivened by Aronofsky’s dark vision and Russell Crowe’s brooding intensity, Noah could pose a marketing challenge for Paramount, which will benefit from its star’s marquee value and the fact that this is one of the first event movies of the new year. But considering that this telling of the iconic Bible story is longer on philosophical questions about humanity’s wretchedness than full-scale action scenes, it may not satisfy audiences who are just looking for spectacle. (Also potentially damaging commercially could be a series of industry news items about supposed bickering between Aronofsky and the studio over reshoots and final cut.) Mediocre reviews and the looming presence of Captain America: The Winter Soldier may conspire to limit Noah’s theatrical grosses, although worldwide revenues should be sizable enough to make back the reported $125m budget.

Set 10 generations after the Biblical tale of Adam and Eve’s banishment from the Garden of Eden, Noah stars Crowe as the titular father and husband who lives in a barren, savage land where roving bands of marauders hunt animals for meat and prey on weaker tribes. (Noah and his family are vegetarians, showing respect to God’s creations — or, as He’s called in the film, The Creator.) In a vision, Noah sees Earth devastated by a flood, and so he decides that The Creator wants him to build an ark and protect the planet’s animals — which are still innocent, unlike humankind. But when Tubal-cain (Ray Winstone), a fearsome warrior, learns of Noah’s plan, he plots to storm the ark to save himself and his soldiers.

Intrigued by the Noah story since childhood, Aronofsky has clearly poured his soul into this big-budget undertaking, using the clout of his commercial and critical hit Black Swan to make a movie that’s far more introspective and despairing than the usual popcorn epic. And yet, Noah mostly proves frustratingly ponderous, an anomaly in Aronofsky’s career that has been marked by films full of bravura flourishes and imaginative storytelling. To be fair, Aronofsky and co-writer Ari Handel have greatly expanded the Noah narrative — not just focusing on the preamble to the ark’s construction but also the aftereffects of the Great Flood — but they fail to come up with characters or scenarios that are all that captivating.

This dilemma is most prominent with Aronofsky’s take on Noah. Though played by Crowe with the same rugged, grizzled heroism he brought to Robin Hood and Gladiator, Noah isn’t a particularly complex or engaging protagonist. More precisely, he’s such an insular character that his quest to follow what he believes to be The Creator’s wishes is shrouded in a glum, lethargic determination. Later, when Noah’s obsession with following his presumed calling begins to take on a dangerous mania, Crowe reveals a ferocity within the character that’s unsettling, but it nonetheless feels unmotivated, a dramatic twist invented by the filmmakers to add some extra tension to the proceedings.

Working with long-time collaborators cinematographer Matthew Libatique and composer Clint Mansell, Aronofsky has envisioned Noah’s world to be a bleak, unforgiving landscape decimated by humanity’s depravity in the wake of Adam and Eve’s fall from grace. The director is occasionally able to make that bleakness resonant—Noah at times exudes the sickening dread of a post-apocalyptic drama—but more often than not, this is a familiar cinematic portrait of societal collapse.

The ho-hum familiarity extends to the effects work, which in places can look surprisingly subpar. The inclusion of giant stone creatures — angel-like beings of pure light who were banished to Earth and became solid — is somewhat impressive, but they give Noah a fantasy-movie element that doesn’t mesh with the rest of the film’s insistence on adopting a foreboding, realistic treatment of a Bible parable.

In truth, that tension between the believable and the fantastical consistently undercuts Noah: The movie wants to be a love story, a family drama, a war movie and a disaster film, but the different tones and genres aren’t properly integrated. The last time Aronofsky tried to make a major studio film, it was the commercial failure The Fountain, but at least there his distinctive eye was resolute, capable of delivering a bold sci-fi film that touched on love, destiny and grief. With Noah, Aronofsky seems overwhelmed by the demands of executing such an ambitious undertaking, resulting in an unfocused, slightly anonymous effort.

Those complaints aside, Aronofsky still manages to explore his favourite theme, the terror of obsession, as Noah evolves from the film’s hero into its antagonist, his dedication to his task clouding his judgment and pitting him against his family. (As Noah’s wife, Crowe’s A Beautiful Mind co-star Jennifer Connelly brings substantial amounts of pathos to an underwritten role.) Though it’s obscured by Tubal-cain’s generic villainy and Noah’s handwringing about trying to find pure-hearted souls who can accompany his family on the ark, Noah does attempt to wrestle with the emotional toll such a momentous obligation would put on one ordinary man. And there are a few inspired sequences, especially a sped-up, effects-heavy dramatization of the Creation myth that hints at the awe largely lacking from much of the film.

But while it’s laudable that Aronofsky has aspired not to depict a disaster story but, rather, flesh out a personal epic about redemption and new beginnings, Noah is far too impersonal to register. The supporting performances are comparably workmanlike. Winstone is little more than a gruff nemesis meant to turn Noah’s resentful son Ham (Logan Lerman) against him, and the usually nimble Emma Watson is mostly lifeless as a love interest for Noah’s other son Shem (Douglas Booth). As for Anthony Hopkins as Noah’s seer-like grandfather, it’s the sort of undistinguished, slightly hammy role that the Oscar-winning actor signs up for more and more these days.