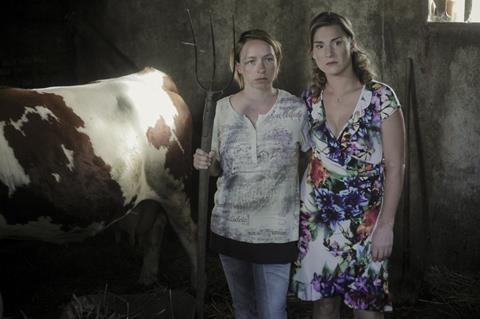 There is nothing basically wrong with the belated debut of veteran actor Miroslav Krobot as a film director, except for the fact that everything in it seems to date back many years ago. This type of Czech humor that has been pretty much defined by the time Jaroslav Hasek had brought The Good Soldier Schweik into the world, was later explored in film to great effect and imagination by such filmmakers as Jiri Menzel, and dabbling in it now is a risky business, because without any new angles to tackle, there isn’t much in such a venture to satisfy a modern audience.

There is no backbone plot to follow here, and though the movie does start with a funeral, and ends with a murder and a heart attack, don’t expect any of these events to raise anyone’s blood pressure.

The classic portrait of the small Czech village is indeed unchanged. The whole plot of Nowhere In Moravia (Dira u Hanusovic) is organised, more or less, around the character of Maruna (Tatiana Vilhemova), who is in her early thirties, lives with her domineering single mother (Johanna Tesarova), tends bar in the tiny local pub, sleeps around with the blundering mayor (Ivan Trojan), has a fling or two with others as well and good-humoredly bears the brunt of her mother’s pestering.

Every once in a while she allows simpleton Olin (Jaroslav Piesl) to touch her breasts but that is as far as she would go to gratify his passion for her. Her sister, Jaruna (Lenka Krobotova, the director’s daughter) is a nurse in the nearby town but she lacks Maruna’s self-confident independence and therefore she is bound to settle for safety rather than romance.

They are all nice people, even if they do bark sometimes, but never really bite. They drink more than they should, don’t worry too much about morality and not at all about anything that takes place outside their little village, which apparently has been going on like this for ages, and has no intention to change.

There is no backbone plot to follow here, and though the movie does start with a funeral, and ends with a murder and a heart attack, don’t expect any of these events to raise anyone’s blood pressure. That’s life for better and for worse, and when one lives in the middle of an enchantingly glorious landscape and when there is plenty to eat and drink, nothing can be really wrong with it.

Sixty-three year-old Krobot may not be much of an innovator as a film maker, but his long theatrical experience and work as an actor certainly helped to create the loose, smiling, pleasant atmosphere which satirises - but never too much - some of the basic qualities of his countrymen. After a while, even Tatiana Vilhelmova’s determined performance in the lead can’t carry it all and the audience would start wondering when will there be something significant happening…but that would be against the spirit of the piece, and no one should dare tamper with it.