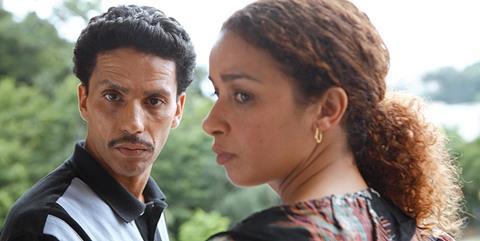 Omar Killed Me is a grim 21st century J’Accuse that revisits a true story, the imprisonment of an Arab worker who became the scapegoat for a brutal murder in 1991.

Omar Killed Me couldn’t be more topical in today’s discussions of immigration and racism.

Tales of the wrongly accused and wrongly convicted are the gift that keeps on giving in cinema. Omar Killed Me, released in France in June, rallied the public at the box office. It is also the Moroccan selection for the Best Foreign Language Movie Oscar. While the poignant drama about a 20-year cause célèbre is likely to have a minimal impact beyond the festival circuit outside France and North Africa, Sami Bouajila in the lead could reap year-end awards.

Actor-director Roschdy Zem eschews a grand Zola-esque narrative for a tight hard-hitting drama built on facts that were all over the French media. Next to the stabbed and bludgeoned body of wealthy Ghislaine Marchal, 65, in the basement of her villa on the Cote d’Azur, were words that she allegedly scrawled in her blood, “Omar m’a Tuer” (“Omar Me To Kill,” in ungrammatical French).

Police seized the obvious suspect, Omar Raddad (Sami Bouajila), an illiterate Moroccan immigrant, 28, who worked on her property as a gardener, humiliating him at every turn. The investigation was stymied when the body was cremated before an autopsy could be performed, leaving the official crime story filled with holes. Raddad was still convicted and sentenced in 1994.

Indignation (with pressure from Morocco and Jacques Chirac) forced the court to reduce his sentence and release him in 1998, yet his conviction was never voided. The Marchal family, still asserting Raddad’s guilt, attacked the film. The fact that no DNA test has yet established Raddad’s definitive innocence fuels some ambiguity and a fierce ongoing debate over the case.

Roschdy Zem’s second feature begins with Raddad’s arrest and plays on the glaring contrast between life in a housing project for the immigrant family (Raddad’s weakness for gambling was cited as a motive) and the hauteur of the moneyed classes and the robed men who sit in judgment.

Bouajila’s silent anguish is eloquent as he plays an incredulous inarticulate man who can’t rebut the charges that are brought against him. In the script by Zem and Olivier Gorce, writer Pierre-Emmanuel Vaugrenard (Denis Podalydes), and the lawyer Jean Verges (Maurice Benichou) are ardent neo-Dreyfusards who battle to clear Raddad. Yet the guardians of French law once again seem to convict a man on the basis of his racial origins.

Given the temptation to polemicise the Raddad case, Omar Killed Me assembles its own story judiciously, with Vaugrenard and Verges piecing together evidence and dissecting scenarios that police used to implicate the accused. Those actors humanise a cold institutional fait accompli. “He’s my only client who was innocent,” notes Verges (Benichou), who was notorious for representing Klaus Barbie, Khmer Rouge leaders and other despised defendants. Verges was the subject of Barbet Schroeder’s 2007 documentary, Terror’s Advocate.

Omar Killed Me couldn’t be more topical in today’s discussions of immigration and racism, and is closer to home for audiences than Days Of Glory (2006), in which Bouajila and Zem collaborated on the story of France’s mistreatment of its North African veterans of World War II. Even in the unlikely event of new revelations about Raddad’s guilt, the public will find that France’s colonial wounds are rooted as deeply as the perennial story of an innocent man who is locked away.