On Any Sunday – The Next Chapter 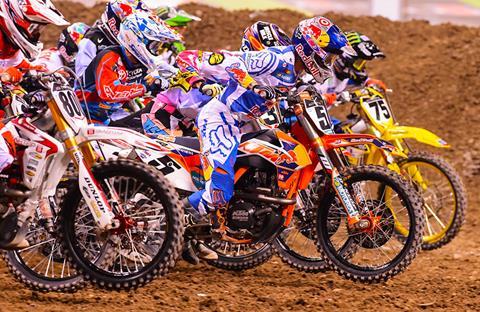 Directed by Bruce Brown, the motorcycling documentary On Any Sunday found wide audiences and cult fame back in 1971 in the wake of Easy Rider. A sequel of sorts, On Any Sunday – The Next Chapter is directed by Brown’s son Dana as something akin to an infomercial on the benefits of the motorbike as weekend family entertainment.

The overall tone of the film is admiring, rather than probing, and some parts of On Any Sunday – The Next Chapter are worthy of admiration.

Yet even as it consistently hammers home that message, On Any Sunday – The Next Chapter comes across as a little conflicted. “It’s dangerous and you get hurt, but I think it’s worth it for what you get out of it,” says one rider about her childhood adventures on the dirt track, as footage depicts smiling tots on quadbikes and the moto fraternity talks about what a happy clan they are.

While they undoubtedly speak the truth, the film-maker is also in serious thrall to the dare-devil stunts of adrenalin junkies such as freestyle motocross rider Robbie Maddison, the Nitro Circus, the 210mph speeds and furious crashes of the MotoGP champions, any of which could result in instant death. Which isn’t quite the Sunday afternoon fun that most families shave in mind.

Paralysed biker Doug Henry, still attempting stunts in an adapted wheelchair - which must at least give his doctors arrhythmia even if his family are accepting - says things like “life isn’t perfect” and “you can’t look back”. But a clear-eyed examination of the consequences of the risks on display is missing, brutally underscored by the end credits which dedicate the film to the deceased young biker Kurt Caselli.

All the way through, producer/sales agent Red Bull’s logo is front and centre – on the caps of the interviewees as they repeatedly stress the “family environment” that biking promises. The uneasy mix of family hard-sell with high-adrenalin danger proves a tricky proposition, particularly in the case of a death-defying jump made by Maddison seemingly for the sole purpose of Brown/Red Bull’s cameras (there are no other visible spectators past his pregnant wife and young child).

Henry himself admits there’s “a thin line between the insane and the sublime” and the characters of On Any Sunday – The Next Chapter strongly call to mind Kevin Pearce and his pals in the defining sports doc The Crash Reel. On Any Sunday’s failure to address the downsides raised by that HBO production can make it feel dated to audiences beyond hardcore dirt track fans, with Brown’s own cheery voiceover adding to the antiquated feel.

On Any Sunday – The Final Chapter plays out in sections which attempt to criss-cross the globe but really focus on North America (a section set in Vietnam is cursory, while the MotoGP finals play out in Valencia, Spain and an endurance race takes place in Austria). It’s an episodic approach similar to the original film, but it means the piece lacks an arc. Starting out with Maddison’s 120 metre ski jump in Utah, it moves on to flat racing an the Springfield Mile, the MotoGP race, the Salt Flats in Utah and the Bonneville Speedway, Hangtown California, Pike’s Peak Hill Climb in Colorado, and so on. A couple of celebrities, biking and otherwise, turn up to add their  (positive) thoughts, including Mickey Rourke, Scott Caan and Bo Derek.

The overall tone of the film is admiring, rather than probing, and some parts of On Any Sunday – The Next Chapter are worthy of admiration. The deaf champion racer Ashley Fiolek provides an compelling illustration of the power of the sport, and the advent of soundless battery-powered machines is also a fascinating element. If you could make a hagiography of a machine, however, this is it, and the lack of critical discernment will make this an awkward proposition for general audiences.

Production credits are wonderfully amped up and some of the stunts depicted are seriously impressive. Editing, courtesy of Andrew Bucher and derived from multiple sources and crews, is flawless.