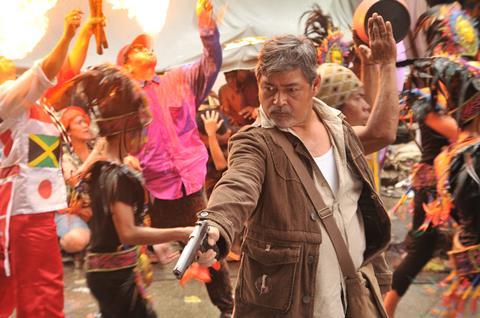 International audiences with a fondness for trigger-happy Jason Statham mayhem might be persuaded to vary their diets with On The Job, a boisterous, pacy thriller inspired by true events from the  lawless streets of the Philippines.

The film is all forward momentum as we are fed information on the bigger picture and the moral dilemmas facing the central characters.

Director and co-writer Erik Matti seems more comfortable with  staging action sequences and generating noir-like atmosphere than creating nuanced characters or subtle dialogue but the basic story of crime and corruption at the heart of a rotten society is  involving enough to forgive any infelicities.

A stellar Filipino cast and the explosive subject  matter will make this essential viewing on its home territory. Well Go’s decision to purchase US rights confirms the film’s potential to make an impression internationally although the blandly uninviting title does it no favours.

On The Job finds parallels in two sets of characters; the father/son relationships both mirrored in  aspects of mentor and protégé status. Veteran prisoner Tatang (Joel Torre) and cocky, young  apprentice Daniel (Gerald Anderson) are both part of a clandestine operation that uses prisoners on  day release as hired killers.

Their incarceration provides the perfect alibi and their orders come from high ranking members of a ruling elite. NBI (National Bureau Of Investigation) cop Francis  Coronel (Piolo Pascual) is assigned to investigate the death of one of their victims. His father-in-law has invited him into the inner circle of power and expects him to respond with special favours  and knowing where his best interests lie.

As it becomes clear that all roads lead to the politically ambitious General Pachero, Francis must decide where his loyalties lie just as Daniel discovers  whether he has the ability and ruthless streak that will allow him to succeed Tatang. Matti and cameraman Francis Ricardo Buhay III capture a real sense of the bustling street markets and sweaty menace on every corner of Manila as they duck down narrow alleys and weave their way  around a maze of shanty town dwellings, shadowy corners and oppressive crowds.

The film is all forward momentum as we are fed information on the bigger picture and the moral dilemmas facing the central characters. Tatang has a wife and daughter that he tries to keep in the dark about the true reason for his home visits whilst Coronel has a wife who cannot understand why he would rock the  boat and endanger a father who has been so generous to them.

The arrival of a gleaming new Range  Rover is a small token of the father’s largesse. Erwin Romulo’s pulsating score adds urgency to the chases and shootouts but seems less appropriate and cheesier when setting the mood for the quieter, emotional scenes and the montages that try to connect the central characters.