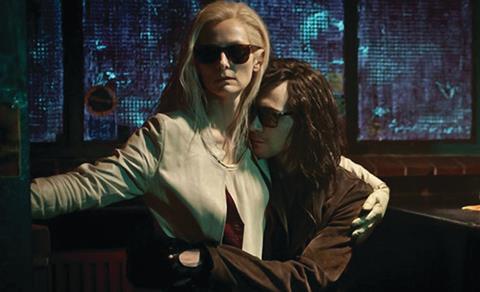 Vampire clichés get a witty and tender transfusion of fresh blood in Only Lovers Left Alive, which channels Anne Rice, Performance and Jim Jarmusch’s 1970s New York rock roots to constantly elegant and entertaining effect. Back on track after the misfiring über-cool of The Limits Of Control, Jarmusch delivers a passionate and consummately chic essay on science, music, time and above all love.

The film is constantly surprising even when it seems to be ploughing old furrows.

His most poetic film since Dead Man, Only Lovers Left Alive is also funny and playful, with Tilda Swinton delivering one-liners with vintage aplomb and Tom Hiddleston playing her world-weary amour to surprisingly lovable effect. Impeccably crafted in every respect - from the sublimely atmospheric visuals to Jarmusch’s characteristically bespoke musical choices - Only Lovers Left Alive will appeal not only to the director’s usual devoted following, but also to the discerning corners of the horror-cultist market and indie-hipster music types alike.

The film is all the more impressive in that it is consciously put together out of the hoariest clichés - drinking blood, improbably extended life cycles, the connection (à la Abel Ferrara’s The Addiction) between vampirism and the heroin lifestyle. But it’s the lightness and the sophisticated good humour with which Jarmusch recombines them that makes Only Lovers… so new.

The lovers of the title are undead married couple Adam and Eve, both hundreds of years old and currently living apart. Adam (Hiddleston) is a reclusive rock musician, living in a cluttered mansion in Detroit and supplied with fresh blood by hospital medic Dr Watson (a droll jumpy turn by Jeffrey Wright). Like Mick Jagger’s rocker Turner in Performance, Adam is in hiding from the world, but still making hallucinatory new music (on ancient analogue equipment) which, to his concern, is leaking out to the world. His personal Renfield figure is music biz hustler Ian (Yelchin), who supplies him with guitars and, at Adam’s request, a wooden bullet with which he’s contemplating suicide.

Eve (Swinton), meanwhile, is living in Tangiers where her mentor (and blood supplier) is the centuries-old playwright Christopher Marlowe (a stately Hurt), the real author of Shakespeare’s work. Unlike the jaded, despairing Adam, Eve is a joyous soul, in love with nature, dancing and literature - she reads at phenomenal speed, and in every conceivable language - and she’s clearly the missing element in Adam’s life. Everything bodes well when she takes a night flight to rejoin him in Detroit - until, that is, her bad-news kid sister Ava (Wasikowska) turns up to crash their private party.

The film is constantly surprising even when it seems to be ploughing old furrows - for example, in having Hiddleston incarnate the absolute dernier cri of junkie chic, bare chest, sunglasses after dark and all. But there’s a lot of fun in an elegant and hyper-literate script that constantly calls attention to its own dry contrivance, as if to notify us that if this is spoof, then it’s spoof taken to the ultimate level of brittle refinement.

Swinton, felinely mischievous, and Hiddleston, suavely Byronic as her straight man, are not only very funny but relishably tender, making the notion of eternal undying (or undead) love a considerably more sophisticated proposition than in the Twilight series. Wasikowska is irrepressibly coquettish and Yelchin plays it nicely gauche as Adam’s attendant ‘zombie’ - that being Adam’s dismissive term for a human mortal.

Science, literature, music history and even botany all play their part in a script that combines occasionally goofy wit (“You drank Ian!”) with a melancholy harping on mortality and humanity’s capacity to mess the globe up.

In this entirely nocturnal piece, Yorick le Saux’s camerawork is sublimely atmospheric, whether exploring the vast desolation of Detroit or developing the leitmotif of spinning motion that sets a heady keynote from the start. Marco Bittner’s production design creates a wonderful sense of dusty claustrophobia, especially in Adam’s messily bohemian lair. And the music is as idiosyncratic as ever with Jarmusch, comprising stately music from avant-lutenist Josef van Wissem, noise-rock from Jarmusch’s own band Sqürl, and among other pieces, a great Denise la Salle soul ballad and a show-stopping turn from Lebanese singer Yasmine Hamdan.