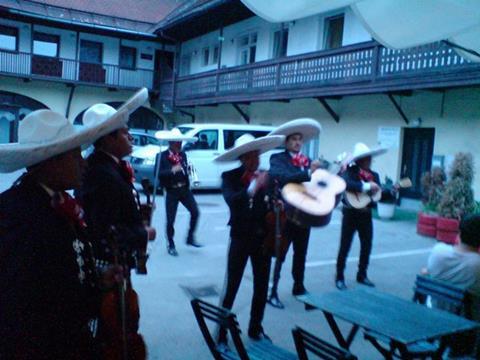 One of Bosnia’s better known film makers, Pjer Zalica has been collecting for the last three years testimonies which were ostensibly supposed to trace the career of The Blue Orchestra, a Sarajevo band enormously successful in the 1980s, and which was almost obliterated by the war but gained back its position with a vengeance when reunited in the late 1990s. Zalica’s main interest, however, was lying not just with the band, but also with the history of that particular generation that started by being Yugoslavs and are still trying to make sense of the changes they lived through.

Surprisingly, what transpires through most of the testimonies is a real nostalgia for a regime that was definitely dictatorial but at least it had the distinction of being the most liberal of all Socialist countries.

A surefire hit at home, where the resonance of every single event and song in the picture is powerful and immediate - DVDs of Orchestra (Orkestar) hit the streets of Sarajevo the morning after its Sarajevo Film Festival world premiere -  it would be a useful tool for anyone wishing to know more about the Balkans and the particular spirit of its people.

Two things, however, might help to make this more accessible for foreign audiences. First, Zalica, in his fervor, tends to overload his film with too much evidence from a wide range of sources. Some pruning of the numerous talking heads, not all of them equally eloquent or relevant, would probably strengthen the arguments by reaching them faster. Second, given the amount of talking in the film, subtitles are essential, but currently they are often illegible when white letters are put on a bright background.

The Blue Orchestra is generally considered a major cultural phenomenon in the Balkans of the 1980s and ‘90s. Their popularity was compared at home to the Beatles and their repertoire, a kind of pop rock using the inspiration of the local folklore, chronicled the mood of the country through all that period.  Under the leadership of Sasa Losic, who put it together in 1983, and has since become equally successful writing music for films and the stage, they reached the zenith of their glory just as the country that adored them, Yugoslavia, once deprived of Marshall Tito’s leadership, was beginning to fall apart.

Losic himself, who provided music for some of Zalica’s films in the past, serves as the director’s point of departure and the lead presence in his film. Among the many people they encounter, some of them are local celebrities, others probably more familiar to Western audiences, such as composer Goran Bregovic, author Filip David, ex-Boston Celtics star Dino Radja, Mirsad Purivatra and his spouse Izeta Gradevic, the founders and directors of the Sarajevo Film Festival, or actors Rade Serbedzija (Eyes Wide Shut, Batman Begins) and Jasna Zalica (Pjer’s wife who acted in his films), who used to perform with the band.

Through all their evidence, the picture organises itself in several chapters. The earliest covers the memories of the Tito era and the uneasy period which followed.  Surprisingly, what transpires through most of the testimonies is a real nostalgia for a regime that was definitely dictatorial but at least it had the distinction of being the most liberal of all Socialist countries. Money and property counted, less, the spirit of building together something special was more important.

With Tito dead, that feeling was gone. Outstanding performers (many of them leading athletes) went abroad, the fabric that kept them all together disintegrated, and the frictions turned into mutual massacres that too many people are trying to sweep under the table recently, according to writer Abdulah Sidran.

Once the war erupted, some of the band’s members left Bosnia, Losic himself going to Ljubljana, another one, Mladen Pavicic, all the way to Canada. When peace was restored, Losic returned, concerned about the reception awaiting him, but found out that while they never forgot, no one ever held it against him for leaving when he did. The band was put together again with a different guitarist replacing the one who would not come back and the post-war success apparently goes on matching their previous performances.

The least one can say is that Zalica did a thorough job. Possibly too much so for audiences that did not share his background. But when it’s over, there is a sense of sadness accompanying this generation that he belongs to himself, which seems to be largely lost in the new cultural and economic climate. They may strive better than ever before but are much less satisfied. Not only because they are not young anymore, though this is certainly one good reason, but there is much more.