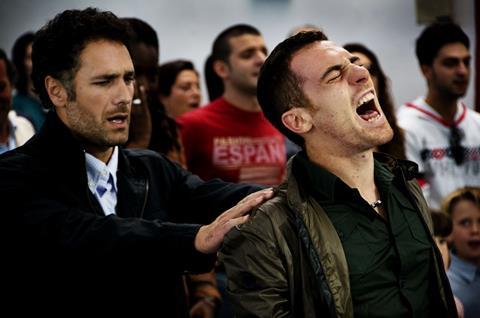 One of this year’s smaller Cannes competition titles, Our Life certainly has merits: it’s a gritty, closely observed slice of Roman proletarian life. And it’s marked by a raw (though at times rather too full-on) performance by Elio Germano in the lead role as a construction worker with two kids, who after the sudden death of his wife tries to provide for his family by setting himself up as a shady building contractor.

In ambience and theme, it comes on a lot like an Italian Ken Loach movie. Loach, though, is good at stories; whereas Luchetti and his co-scriptwriters are so enamoured of their characters that they forget to build a satisfying dramatic home for them.
Our Life’s focus on the family, and redemption through families real and alternative, will reach out to Italian audiences, but this is a less commercial prospect than Luchetti’s last, My Brother is an Only Child. That had a sixties retro setting and an epic Best-Of-Youth-style timeline.

This is a punishingly neo-neo-realist tale shot on a distractingly shaky handheld camera, leavened only with a few audience baits: heartthrob Raul Bova in a minor role, some cute kids, the music of Italian stadium rocker Vasco Rossi and an upbeat ending. All will work better at home than abroad, where Our Life looks unlikely to reach even the handful of territories that picked up My Brother… for theatrical distribution.

Initially, the film’s rambling tone and jagged scene structure come across as confident rather than dispersive. Claudio (Germano) is one of those risky heroes who is never entirely likeable: street smart but also street crass, he’s brimful of arrogance as a building site foreman, but is saved by a real affection for his young wife Elena (Ragonese) - who he turns on by whispering the names of IKEA furniture - and for his two young sons.

Elena is pregnant again, but she dies in childbirth, and Claudio is knocked sideways. He’s already had a shock when he finds the body of a Romanian illegal immigrant worker on the building site. There’s a kind of moral payback in Elena’s death after his failure to report this other death, and in the way the dead man’s wife Gabriela (Berzanteanu) and teenage son Andrei (Ignat) enter his life.

But at this point the film starts to dither and the dramatic lines begin to blur. Using the cover-up of the Romanian worker’s death as a blackmail chip, Claudio convinces construction king Porcari (Colangeli) to give him the contract on a new residential block in Rome’s northern suburbs, which needs to be finished in record time.

He raises the money from a bad bunch of loan sharks thanks to his wheelchair-bound drug-dealing neighbour Ari (Zingaretti), and sinks part of it into flashy toys for his kids - the neon message being that Claudio is using consumerism to assuage his grief and guilt. Things, of course, spiral before they get any better.

Keen to show the positive side of life in Italy’s new outer suburbs - the solidarity, the love, the animal energies - Luchetti lets observation carry him too far into explorations of minor characters, like Claudio’s siblings Piero (Bova) and Loredana (Montorsi), who in the end add little. Our Life has its heart in the right place. But it feels like an episode of a tough, cutting-edge TV drama with a film struggling to find a voice inside it.