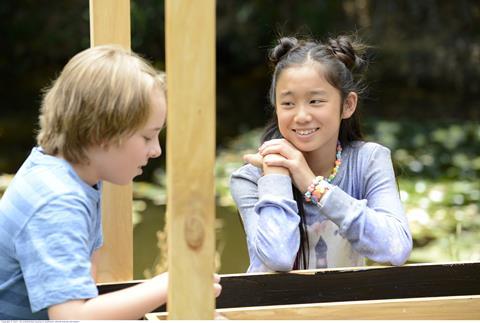 Robert Connolly’s Aussie ‘family movie’ looks good, sounds great and inspired its first Sydney audience to launch hundreds of folded paper planes, the paper kindly supplied by Roadshow Films. If the adults present were less enthusiastic than the kids, it could be because the flight of this country-boy-conquers-the-world story requires constant magical thinking to keep it aloft.

The camerawork of Tristan Milani is excellent in the wide bushland sequences and the more traditional city views of Sydney and Tokyo.

Paper Planes was premiered at the Melbourne Film Festival and has since won the CinefestOz competition, the richest film prize in Australia. It opens wide on 246 local screens on January 15 for the final fortnight of the Christmas/New Year/Australia Day holiday.

Twelve-year-old Dylan (Ed Oxenbould) lives with his deeply depressed father (Sam Worthington, no less) in an idyllic bush shack. We suspect that something terrible has happened to Dylan’s mother. At school, under the influence of a kindly teacher (Kath & Kim’s Peter Rowsthorn), Dylan discovers he possesses an uncanny ability to make and propel unbeatable paper planes. His improbable first effort goes further than any other in the entire movie.

With minimal ado, he wins the ad hoc school competition, wins the regional, wins the state in Sydney, then heads for Tokyo and the world championship. What is Dylan’s secret? Connolly’s handsome movie — he directs, co-produces and co-scripts with Steve Worland — leaves us uninformed. He just seems to have the knack, while coping with an inert Dad, a disreputable old git of a Grandad, a pudgy best mate, a sneaky rival, and a sweet Japanese girl friend.

The camerawork of Tristan Milani is excellent in the wide bushland sequences and the more traditional city views of Sydney and Tokyo. If both script and editing are overemphatic, the full musical score of composer Nigel Westlake is a surprise. With the Melbourne Symphony Orchestra to hand, Westlake backs the swooping paper planes with some lushly stirring musical sequences.