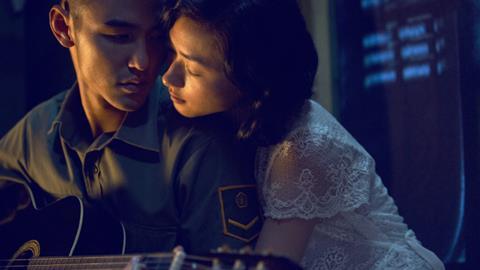 Set in Kinmen (a group of islands administered by Taiwan) in the late 1960s and ’70s amidst continuous tensions with mainland China, Doze Chen-Zer Nui’s (who made 2010’s Monga) latest provides viewers with much to reflect on through its delicate subject matter that delves into military prostitution, but this is no social realist drama; rather a compelling coming of age story that makes the narrative all the more accessible allowing it resonate well beyond the closing credits.

The Taiwanese filmmaker is keen to use a rich palette of colours in some of his films, and so stylistically the film is quite striking from the use of Mise-en-scène through to the set-design and costumes.

Opening this year’s Busan International Film Festival (BIFF) following its release in Taiwan in September, the film should have a solid festival run given the subsequent exposure its set to receive along with how the film successfully tackles this period of contemporary history, but commercially on the international front, it doesn’t quite have the same draw making its prospects less certain, not least because there is no Chinese release date.

The film begins by providing viewers with some of the film’s historical context though international audiences, especially, will inevitably find the nuanced narrative more challenging to follow, but Niu is careful not to overly simplify the turbulent backdrop nor make it totally inaccessible.

The film takes place in 1969 when Taiwan remained in a longstanding standoff with mainland China. Although relations were not as turbulent as they once were following the 1949 Battle of Guningtou (also known as the Battle of Kinmen) during the Chinese Civil War when the People’s Republic of China failed to take the islands of Kinmen otherwise known as Quemoy located in the Taiwan strait, a large military presence on the island continued as tensions still remained.

On Kinmen, a 19 year-old conscript called Pao (Ethan Juan) arrives for his three-year military service, and once it’s discovered he cannot swim he’s transferred from an Amphibious Reconnaissance Battalion to a unit called ‘831’ or ‘Paradise in Service’ which is essentially a military run brothel.

There Pao begins to develop meaningful friendships, which includes the illiterate Sergeant Major Chang Yun-shan (Chen Jian Bin) who asks Pao to help him write letters to his mother. He also forms a relationship with one of the prostitutes Nini (Wan Qian) who has turned to prostitution to have her sentenced reduced after she killed her abusive husband.

It’s through these relationships where Niu reveals the unfortunate and at times dangerous cycle that many found themselves in during this period, but not to dissimilar to his film Monga, he creates a warm ambience despite the bleak setting. This may appear at odds with the film’s themes, but it allows Niu to explore this period of history without simply laying blame, but rather to provide a layered perspective focusing on individuals as well as the systems that govern them. Crucially, however, what lies at the heart of this feature is not a critique of sorts but a coming of age story.

As seen with Nu’s Love (2012), the Taiwanese filmmaker is keen to use a rich palette of colours in some of his films, and so stylistically the film is quite striking from the use of Mise-en-scène through to the set-design and costumes. At times, however, the film does appear to be somewhat theatrical where the film’s production design is perhaps overly stylised.

Ethan Juuan who also acted in Niu’s Monga and Love demonstrates again he fits well into Niu’s films playing the endearing and charming Pao while it’s difficult to fault the remaining cast. Wan Qian, especially, along with many of the other challenging female roles mould into their respective roles without any noticeable difficulties despite the demands playing such parts. Chen Jian Bin, also, is equably as convincing as he also aids in driving the narrative forward.

Looking at the running time, 133 minutes is largely excessive and a bit of trimming in the film’s mid-section would further benefit the film, but its overlong duration is a minor quibble in what is an otherwise impressive and engaging feature.