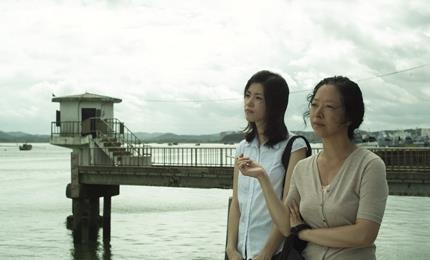 Jeon paints a vivid portrait of a community that has been largely abandoned, and whose existence itself is under threat.

One of Jeon’s stronger works, it will be embraced by festivals, though its commercial prospects with domestic and international audiences look very limited. The film screened at the Busan International Film Festival.

The film opens with the first meeting between a middle-aged single mother Ok-ryeon (Seo Kap-sook, seen in Bongja) who owns a hilltop bar and cares for her mentally handicapped son Sang-guk (Park), and an emotionally reserved woman Su-jin (Lee Seung-yeon) whom she has hired to run the bar.

While serving local customers and looking after Sang-guk, Su-jin slips hesitantly into her new routine, but is periodically haunted by visions and flashbacks to traumatic experiences from her childhood. Meanwhile, Ok-ryeon resists the admonitions of her policeman lover and heads a local effort to demonstrate against the planned redevelopment of the community.

In an aesthetic sense the low-budget film shares much in common with Jeon’s previous work, which includes the award winning With A Girl of Black Soil (2007) and San Sebastian competition entry I Came from Pusan (2009). Here too, his focus is on alienated, lower class characters who grapple with inner trauma and external threats to their livelihood.

Nonetheless, the director de-emphasises the drama of their situation and clouds our perception of what the characters are actually feeling. In this sense, the viewer is constantly challenged to piece together the emotional states of its characters.

Revisiting themes of trauma, sexuality, and the conflict between hope and despair, Jeon paints a vivid portrait of a community that has been largely abandoned, and whose existence itself is under threat.

The film’s title derives from the name of the bar, which is identified by a pink signboard with no lettering, and which evokes in an ironic way the spirit of la vie en rose.