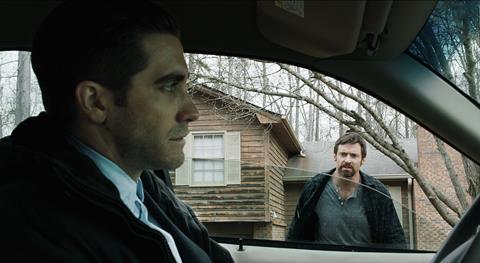 An impressive US debut for French-Canadian director Denis Villeneuve, dramatic thriller Prisoners is a potent mix of suspense, emotion and intrigue that draws intense performances from leads Hugh Jackman and Jake Gyllenhaal. Though disturbing subject matter and a very dark tone will certainly be limiting factors at the box office, festival exposure and possible awards season attention should still allow this expertly crafted Alcon production to find an upmarket adult audience.

Villeneuve lets the tension build slowly and organically, using most of his screen time to look at how the relationships change as the clock ticks on the search for the missing girls.

After its surprise premiere last week at Telluride, the film screens this week at the Toronto festival, helping build momentum for a wide North American release through Warner Bros on September 20. A screening at San Sebastian will precede a Sept/Oct global rollout during which Jackman’s international success with Les Miserables and The Wolverine will give distributors -  Warner in a few territories, independents elsewhere - additional marketing leverage.

The one-time Black List script by Aaron Guzikowski (whose other credits include Contraband) introduces Jackman’s blue-collar family man Keller Dover just before his six-year-old daughter and another little girl are abducted from their Pennsylvania suburb. Gyllenhaal’s Detective Loki starts investigating the case, but not to the satisfaction of Keller, who is quickly convinced that local man-child Alex (There Will Be Blood’s Paul Dano) knows what happened.

Villeneuve - best known up to now for Oscar-nominated foreign language drama Incendies - lets the tension build slowly and organically, using most of his screen time to look at how the relationships – between Keller, Loki, Alex, Keller’s wife (played by Mario Bello), the other child’s parents (Terrence Howard and The Help’s Viola Davis) and Alex’s mother (Melissa Leo) – change as the clock ticks on the search for the missing girls.

The mood of foreboding is enhanced by the film’s muted colour palette and cinematographer Roger Deakins’ use of digital cameras and natural light.

In the final hour of its two-and-a-half hour running time, the film is more about shocks (including a couple of gruesomely violent scenes) and plot twists. The twists don’t always make complete sense and occasionally feel gratuitous - but they do keep the suspense going until the very final frame.