Prometheus remains docked at number one in the UK 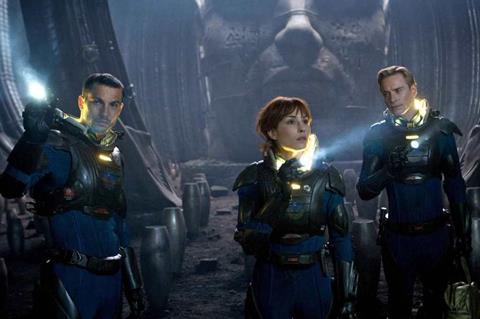 Despite the start of the Euros, Fox’s Prometheus added $5.2m (£3.3m) in its second weekend to record a second consecutive week in top spot at the UK box office.

Continuing to show impressive resilence after climbing a place to second was Sony’s Men In Black 3, dropping just 16% in its third week on its way to an estimated $3.9m (£2.5m).

The threequel has now amassed $24.3m (£15.6m), the third biggest international market for the film which is now the highest grossing instalment of the series overseas.

Universal’s Snow White And The Huntsman fought its way to a further $3.6m (£2.3m) from its 467 sites as it fell to third. The fantasy enjoyed a decent first week as it added over $5m during the Bank Holidays and school half term, for $14.7m (£9.4m) to date.

The week’s highest new entry belonged to eOne’s horror The Pact in fourth with a $1.4m (£932,325) opening bow, the fourth best for a horror film this year in the UK.

Ken Loach’s Cannes competition title The Angel’s Share is currently the director’s sixth best performance in the UK, standing at $1.1m (£718,140) through eOne after two weeks in play.