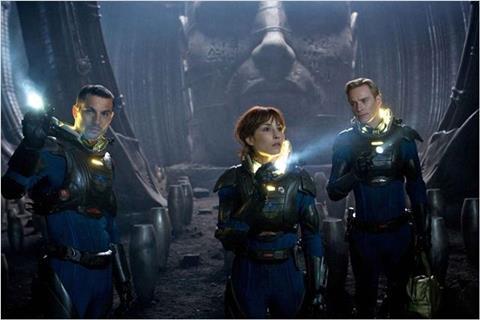 It has been three decades since Ridley Scott last dipped his directorial toe in science-fiction territory (with 1982’s Blade Runner), but with his fantasy epic Prometheus it is clear his striking sense of vision, drama and excitement fits perfectly with the genre and he has delivered a film that is already one of the most anticipated titles of the summer and should thrill, challenge and provoke audiences ready for his signature brand of intelligent and visceral film-making.

A Ridley Scott film is always perfectly shot, intelligently edited and easy on the eye, and Prometheus is no different.

The film enters a busy early summer marketplace, with rival fantasy fare such as The Avengers still strong and Men In Black 3 opening well, but there is a real ‘must see’ cache about Prometheus – thanks to a smart viral campaign, well-positioned teaser trailers and the much-hyped link to Scott’s sci-fi horror classic Alien – that should see it open strongly.

There were once plans to script a formal prequel to Alien, but the project evolved into Prometheus, which, while its climax offers tantalising answers in terms of the acid-for-blood alien creatures and the space craft they are first discovered in the original film, is very much a stand-alone film…albeit one that is very aware of the place it takes in the mythology of the Alien series of films.

Ridley Scott is a master when it comes to visualisation of the environment his stories are set against, and it is clear from the majestic opening scenes of Prometheus as his camera traverses an alien planet (in truth a blend of Icelandic vistas with more than a little CGI) and a magnificently muscled white skinned alien ingests something that causes him to melt away and genetically mix with the make-up of the world itself.

The story then switches to our very own century – admittedly the end of it – as archeologists Elizabeth Shaw (Noomi Rapace) and Charlie Holloway (Logan Marshall-Green) piece together a series of clues in cave pictograms from ancient civilisations that point to a location in distant space. To them it is an invitation to come and visit.

With the backing of mega-corporation Weyland Industries, a mission to find the location is launched with the spacecraft Prometheus carrying a team on a two-year journey to try and discover answers to the ultimate questions.

The arrival at the planet in 2092 allows for the familiar recovery from hyper-sleep scene to be dusted off, and the crew (larger in number to the crew in Alien) are slowly introduced – including sleek Meredith Vickers (Charlize Theron), a Weyland Industries executive; servile robot David (Michael Fassbender), the ship’s housekeeper, but also with a mission of his own, and Janek (Idris Elba), the ship’s working-man captain, there to balance the enthusiasms of the scientists with the corporate interests of the Corporation.

What they discover as they explore a cavernous pyramid on the planet offers clues to the origins of mankind and also the realisation that something rather malevolent lurks deep within the complex. Once they start to piece together the clues they find themselves pitted against both the creators they dreamed of discovering and brutal and bloody organisms that seem to exist solely to destroy. Without going into the story’s many plot twists, needless to say there are enough thrills, horror, action and plot to keep sci-fi fans engaged, and even an ending that leaves an opening for a follow-up film.

One thing that Prometheus isn’t is an Alien-clone. Alien – despite that it may feel slowly-paced set against current editing styles – was a film that embraced its horror-in-space format, and after a slow-burn set up and magnificent central gore moment as the mini-alien bursts from John Hurt’s chest settled into a brilliantly shot monster movie before Sigourney Weaver’s final memorable battle. While Prometheus has some striking chilling moments it never plays the all-out horror card, instead developing the science alongside the action and punctuating the film with moments that jolt and amaze.

And while she does have her action moments, Noomi Rapace’s Shaw is no Ripley. Though she has a few nasty close encounters of the alien kind she is never called upon to go toe-to-toe with a snarling beastie. That being said, Rapace is dynamic and driven as a scientist who hopes for the best but ends up encountering the worst. Her gritty but gentle character is a nice contrast to Charlize Theron’s sleek ice-queen Meredith Vickers, a woman of wealth and power – as well as a niggling vulnerability – who comes close to being the villain of the piece before her backstory is gradually revealed.

Idris Elba is appropriately disheveled as the seen-it-all-done-it-all captain (and his sexual tension with Charlize Theron is nicely handled), while Logan Marshall-Green makes a strong impact as Shaw’s partner. The likes of Rafe Spall, Sean Harris, Kate Dickie and Benedict Wong have small, but nicely defined crew member roles, though there are also quite a few back-row crew types who are ill-defined and clearly there mainly as alien fodder. Patrick Wilson crops up in a brief cameo as Shaw’s father.

It is Michael Fassbender, though, who perhaps has the most fun in Prometheus. He is first introduced on board the ship tending to the crew who are all in hyper-sleep, playing a little basketball and watching (in the most delightful of scenes) his favourite film, Lawrence Of Arabia. He is so taken with it that he dyes his hair and amends his voice to look and sounds more like Peter O’Toole as Lawrence.

Though on-board as a helper – and largely ignored once the crew awake – David is also programmed for a more darker mission at the behest of his creator Peter Weyland (Guy Pearce, heavily made-up), who crops up for a few vital scenes. David bears no malice to the crew, but is simply fulfilling his programming…which brings nothing but danger for the crew, and for Shaw in particular a memorably nasty moment inside a hi-tech medical machine.  This sequence in particular is tense, chilling and bordering on the gory and a real action highpoint.

Alienfans will be on the look out for horror scenes that are variations on the theme of the ‘chest-buster’ or ‘face-hugger’ in the original film, and while in Prometheus things are never played for pure horror, there are some brilliantly staged scenes that will make audiences jump and squirm, and yes beasties do find their way into human bodies in nasty ways…and want to make their way out in an equally unpleasant manner.

The effects are brilliantly woven into Scott’s film, with cinematographer Dariusz Wolksi delivering some beautiful moments (the 3D is also very easy on the eye, and never too dark), while the production design from Arthur Max and Janty Yates’s costumes help give the film that real sense of a sci-fi epic. A Ridley Scott film is always perfectly shot, intelligently edited and easy on the eye, and Prometheus is no different.

It is also oddly reassuring that in one of the climactic scenes, as Noomi Rapace’s character has to investigate an escape craft where she suspects danger may be lurking, that even on board a futuristic spacecraft there is a handy (if stylishly shaped) axe easily to hand as she stalks through the glistening corridors.