Inside a women’s prison in Ukraine, incarcerated mothers are forced to hand their children over for adoption 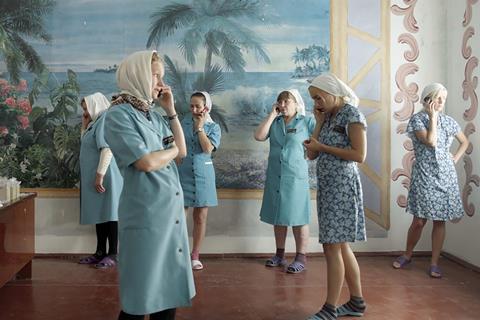 Within the foreboding walls of a women’s prison in Odessa, Ukraine, female prisoners live out pregnancies, give birth and raise their children for the first three years of their lives — before, due to state laws, many are shipped off to the local orphanage. Basing this docudrama on the real life stories of 107 of these women, director Peter Kerekes (making his fiction debut after a career in documentary filmmaking) presents a stark study of lives without freedom and, often, with little hope.

Embraced by the festival circuit after its debut in Venice Horizons, where it won best screenplay for Kerekes and co-writer Ivan Ostrochovsky, 107 Mothers has sold to a slew of European territories where it could spark the interest of arthouse audiences, and those particularly interested in women’s stories. Although fascinating, and certainly moving, its blend of fictional elements with interviews with actual inmates never fully gels, but as Slovakia’s entry to the international category of the Oscars this year 107 Mothers seems certain to continue to draw notice.

We first enter the prison in the height of a Ukranian winter; snow piles against the walls, the women wrap up warmly to do their mandatory exercises. It’s a chilly introduction, and this sense of coldness will permeate throughout the film, even as the weather warms, underscored by Martin Kollar’s beautiful yet detached cinematography.

Despite the frigid temperatures, a line of naked, pregnant inmates line up to be weighed and measured, and to answer perfunctory questions about their physical health. Then, a woman, Leysa (professional actress Maryna Klimova), gives birth in up-close detail — Kerekes is determined never to look away from what might be uncomfortble viewing — before traveling in a prison van, newborn in arms, back to the prison, where she is separated from her son Kolya for two weeks quarantine.

After that, the pair adapt to life in the facility, where Leysa is serving a seven year sentence for killing her husband out of, she says, “jealousy”. He is looked after in the children’s ward while she carries out her duties; she regularly joins the other mothers who line up to breastfeed their offspring. Leysa is warned by prison warden Iryna (Iryna Kiryazeva) — who herself is shown to be unhappily single and childless — that she must repair relations with her mother; otherwise, at the age of three, her son will be placed in the children’s home.

Suddenly, shockingly, it is three years later and Leysa is facing that very fate. We watch as other women bake their children birthday cakes which they share in an anonymous room, before an orphanage worker enters to take the child away. The first time we witness this happening and it’s clear that Kerekes has cast real-life mother-and-child duos for these distressing scenes. Yet it happens time and again; a regular heartbreak in this facility. Leysa desperately attempts to repair family relationships before her son is lost to her forever. While she writes in a letter that time in the institution passes at a glacial pace, for her it is also running out.

Leysa’s story acts as a narrative through line, punctuated by interviews with the real-life inmates who make up the majority of the cast. Someone off camera — perhaps Iryna — talks to them about their crimes (most seem to have killed their husbands or their husband’s mistress), their children and their hopes for the future. These sequences don’t always tie seamlessly into the story at large. It makes for a splintered and oddly dispassionate viewing experience and, while it’s easy to feel empathy for these women and their plight, the film doesn’t leave the lasting impact that their stories perhaps deserve.