‘A Machine To Live In’: Visions du Réel Review

Brasilia, through the highly-subjective lens of Yoni Goldstein and Meredith Zielke 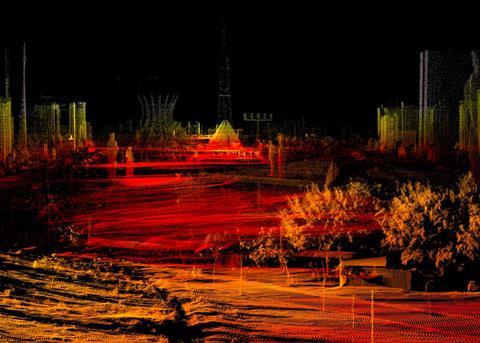 Cities aren’t just places — they’re ideas that represent a culture’s expression of itself through architecture and individuals. The ruminative A Machine To Live In takes us to the futuristic capital of Brasilia, combining a history lesson with snapshots of the diverse, sometimes contradictory population of Brazil’s capital city. Directors Yoni Goldstein and Meredith Zielke seek an impressionistic portrait that evokes the city’s spiritual character — an ambitious undertaking that brings together overlapping voiceovers, occasional computer-generated landscapes, and a generally wandering, meandering air. The result is a fitfully fascinating abstraction that requires patience from adventurous audience members.

Viewers will need to acquiesce to the film’s peculiar rhythms

Screening as part of Visions du Reel’s Burning Lights International Competition, this hybrid documentary boasts a wealth of gorgeous visuals — many of them courtesy of Brasilia’s space-age architecture, the Oscar Niemeyer-masterminded collection of awe-inspiring buildings deposited in the middle of this South American country. Aimed more at cineastes and highbrow viewers, A Machine To Live In caters to those who enjoy a little cinematic provocation.

“Let us for a moment imagine a dream together,” a disembodied voice announces at the start of the film, and what follows possesses the fractured logic of the subconscious. The documentarians move from subject to subject, introducing us to a panoply of Brasilia’s citizens — everyone from bikers to concert revellers to religious leaders to Esperanto devotees. But the other meaning of “dream” is also explored, as A Machine To Live In investigates how the city was designed to be a modern utopia — and how that aspiration has failed. Drawing from the work of writers such as novelist Clarice Lispector, the movie juxtaposes Brasilia’s idealism with its complicated reality.

Goldstein Zielke have constructed a documentary of ideas and images, playing on old science-fiction tropes to evoke the throwback futurism of Brasilia’s buildings. (The city was built from 1956 to 1960.) A Machine To Live In startlingly conveys the beauty and coldness of these structures, depicting a city both ahead of its time and in disarray.

While A Machine To Live In features a few on-camera interviews, Goldstein and Zielke incorporate these voices like a painter would wield different colours. For better or worse, the film is a collage of different lives and points of view, hoping the cumulative effect will have a greater impact than the individual pieces. To that end, surreal moments come and go — a chorus of young people singing, a tightly choreographed regiment of soldiers in formation, a solitary horse clomping through a packed parking lot. Those striking tableaux are jarringly offset by references to notable local figures, including Niemeyer and truck-driver-turned-mystic Tia Neiva.

Certainly, viewers will need to acquiesce to the film’s peculiar rhythms, accepting its tendency to avoid deep analysis in favour of brief snapshots of observed behaviour. A Machine To Live In’s compendium quality can be frustrating — the seeming arbitrariness of some segues leaves one wishing for a more focused approach. But at the same time, there’s something entrancing about how Goldstein and Zielke restlessly dissect Brasilia, seeing in this city both the promise and the shortcomings of all large urban centres.

While a despairing tone pervades — especially in the different voiceovers and occasional onscreen text — this essay film can’t help but teem with life as we encounter so many individuals as they navigate Brasilia’s dysfunction. Like all big cities, Brasilia is a bundle of contradictions, and A Machine To Live In embodies that energy in bracing ways. What’s less clear by the end is whether the highly-subjective A Machine To Live In ultimately adds up to much beyond a stimulating collision of disparate footage.

Part of the Burning Lights Competition, ‘A Machine To Live In’ plays in www.visionsdureel.ch between April 25 and May 2