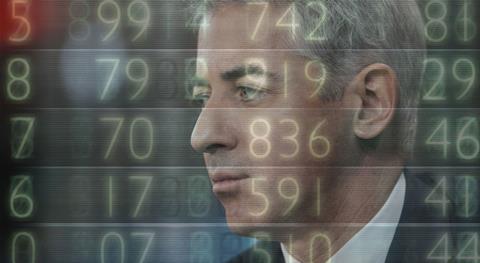 Those who consider themselves numbers experts after The Big Short should be easily convinced to watch the real thing  – what they’ll see in Betting On Zero is Wall Street in all its naked venality. This is a documentary about the driving desire to profit, whether it be by bringing down a company, Herbalife, for personal gain, speculating on that manipulation, or cashing in on the little people looking for a slice of the get-rich-quick American Dream. It’s a corporate PR’s nightmare, whether the company be Herbalife or America PLC.

Assuming the film’s legals are in order, this could be Herbalife’s Super Size Me moment.

Ted Braun (Darfur Now) takes a run on the story of hedge funder Bill Ackman’s Pershing Square Capital and its three-year war on global nutritional giant Herbalife, which he denounces as the biggest pyramid selling scheme in history. Betting a billion dollars that its stock is worth zero in a controversial short position, he claims the company targets the savings of America’s working classes, many of whom are undocumented Latino illegals. Braun finds his film’s heart in their story; certainly, it’s a relief to find one beating here.

Morals are a moveable feast in this film, which is a classic tale of good and greed and will be a festival natural as well as premium cable fare. It is, however, highly unlikley to help Herbalife - assuming the film’s legals are in order, this could be the company’s Super Size Me moment.

Complicating matters for Ackman is a rival swoop by another unsympathetic billionaire, Carl Icahn of Ichan Enterprises, lined up with other Wall Street foes of the self-righteous Ackman. They boost the Herbalife stock as a chess move in a bitter personal vendetta, while over at the embattled Herbalife, footage shows former Disney president Michael O. Johnson, America’s highest-paid CEO at one point, striding around the stage at corporate conventions, drenching cheering audiences in honeyed platitudes.The ultra-smooth Johnson, who ran Disney’s international operation under Michael Eisner, is very much the face of the brand; his teeth practically twinkle.

Even if it tells the age-old story of the filthy rich getting richer and the poor going nowhere, Betting on Zero is still rather shocking. Braun’s documentary spins from Wall Steet to the poor backstreets of American cities, where Herbalifers are easily persuaded to invest their savings in get-rich-quick ventures (including dismal nutrition stores) which appear to be loaded against them. Grassroots agitator Julie Contreras is a piston, vocally protesting and encouraging victims in a class action lawsuit.

Ackman is our entry to the film, but his hard-headed quest soon spins out of control (quickly he decides to donate all potential profits to charity). Braun documents events as they happen, making extensive use of financial TV clips while Vanity Fair’s William D. Cohan, who has written extensively on the story, gives clear-eyed background. If Ackman comes across like as arrogant, and Michael O Johnson oily, Icahn reminds the viewer why the filthy rich make such great pantomime villains. The plight of those down the food chain, however, is sadly all too real.