'Between Sea And Land': Sundance Review 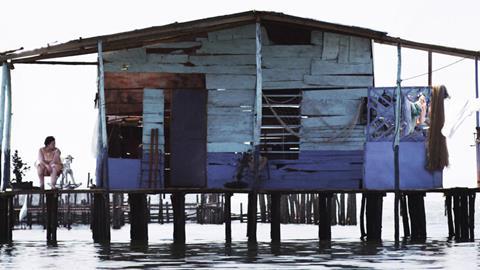 Between Sea and Land (La Cienega: Entre el Mar y la Tierra) was clearly a labour of love for Colombian star Manolo Cruz. He wrote, co-directed, produced, partially funded and stars in this portrait of a young man imprisoned by a degenerative muscular disease. He lost twenty kilos to convincingly convey the muscle wastage suffered by Alberto, who spends his life confined to bed in a stilted shack in the swamplands of La Cienega Grande, on the edge of the Atlantic ocean. But while the subject matter is approached with compassion, the film’s take on disability can tend towards the simplistic.

Cruz and Del Castillo favour plenty of unforgiving close up shots of Alberto’s anguished face, accentuated by a tearful orchestral score that sweeps in at key emotional moments

The distinctive setting, both geographically and culturally, will be a selling point on the festival circuit – the film screens in Sundance’s World Dramatic Competition Strand having picked up two Primer Corte awards at last year’s Ventana Sur film market. But the melodramatic tone and crude approach to the politics of disability might hamper the film’s theatrical prospects with audiencesexpecting a more complex approach to the subject demonstrated by films like Rust And Bone, Untouchable and The Sessions.

Cruz sets the scene for his character’s present day condition with early flashbacks, presented as memories that haunt his dauntless but over-protective mother Rosa (Vicky Hernández). Noticing that her young son Alberto is having problems with pain and partial paralysis in his arm and leg, she storms into a clinic in the city and demands help. A stickler for procedure, the receptionist threatens to have her removed by the police for not having made an appointment, but the formidable power of maternal love wins through and a kindly doctor takes pity and examines the boy.

The diagnosis is distonia – a gradual degradation of all the muscles in the body. The prognosis, for the son of an impoverished widowed mother who ekes out a living by bartering the fish she nets from the swamp, is grim.

Rosa’s home, a wooden shack surrounded by water and filled with the oppressive humidity of the swamp, becomes a loving prison for her now adult son. Alberto rigs up an ingenious device consisting of a mirror and a fish-slice which serves as link to the world outside which is always tantalisingly out of sight. But his main connections to a life beyond his bed and the stuttering machine which is crucial for his survival are his mother and his gorgeous childhood friend Giselle (Viviana Serna).

There is no love lost between the two women in Alberto’s life. Rosa resents Giselle’s self-appointed status as her son’s ‘angel’, and fears, with good reason, that Alberto’s heart will be broken. Well-meaning Giselle defies the mother to make Alberto her project, using her job at an NGO to canvas experts who might be able to help him.

Cruz and Del Castillo favour plenty of unforgiving close up shots of Alberto’s anguished face, accentuated by a tearful orchestral score that sweeps in at key emotional moments. And there are plenty of them – Cruz goes all out with a committed performance as someone who longs to be seen as a man rather than a disability. That said, the film’s approach to Alberto’s condition can be retrogressive, veering towards the ‘better dead than disabled’ cinema cliché identified by disability activist and critic Paul Longmore.