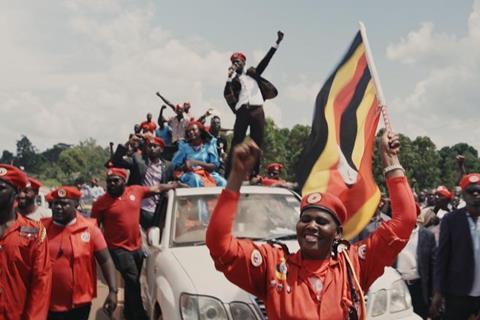 Robert Kyagulanyi, aka Bobi Wine, has become the face of change in Uganda, the charismatic pop star-turned-politician the embodiment of hope in a country ruled by a brutal dictatorship. Christopher Sharp and Moses Bwayo’s documentary snapshot Bobi Wine: Ghetto President is as gripping as any thriller but without the tidy, uplifting resolution that real life rarely provides. This emotional, thought-provoking work should travel extensively, attracting interest from festivals, streamers and documentary channels.

An intimate portrait of a hugely engaging figure

Bwayo and Sharp begin their story in 2014 when the 32-year-old Wine is starting to use his music to expose the failings of President Yoweri Museveni, who has been in power since 1986. Wine’s songs talk of corruption, injustice, poverty and the lack of educational opportunities. That message resonates with thousands of Ugandan citizens, and he starts to attract grassroots support. A dapper, idealistic figure with the passion of Che Guevara and the calm certainty of a Nelson Mandela, he is sustained by a belief that history is on his side. “We’ll walk with swagger in the new Uganda,” he promises. But the country’s long walk to potential freedom carries a heavy dose of harsh reality.

The filmmakers have gained remarkable access to Wine and his family over the past eight years. They follow him through his election to Parliament in 2017 and the groundswell of hope when he declares himself a candidate for president in the 2021 election. We gain a sense of who he is, the importance of his wife Barbara and family, as well as the growing price of what he is trying to do.

Indeed, this is a regime that manipulates the rules and silences opposition by any means necessary. When Museveni reaches the age limit for a presidential candidate, the government is encouraged to change the constitution to remove the impediment. There are random arrests and death threats. Police and soldiers spray bullets into assembled crowds, leaving pools of blood on the streets. Vote-rigging seems widespread. The media is rigorously controlled. Two days before the presidential election, the government blocks all access to social media, and any internet service is subsequently shut down.

Bobi Wine features astounding footage of opposition candidates being snatched from their homes, and of Wine being arrested and taken into custody in the middle of a media interview. The implacable Museveni’s side of the story is given some weight through the inclusion of television interviews in which he tends to blame the country’s travails on foreign troublemakers, the media and “homosexuals.” This is a film that underlines the importance of fearless international journalists like Lindsey Hilsum, whose reports and searching interviews are threaded through the documentary.

Wine’s infectious music provides the soundtrack, with his pithy, urgent lyrics shown on screen. Bobi Wine is highly sympathetic to its subject, but not without concerns and reservations. Wine himself reflects that, in 1986, Museveni was a source for hope and wonders what has changed in him. Does power inevitably corrupt?  There is also the question of outside complicity in sustaining Museveni’s regime. Why is there not more global outrage at the beatings, torture and suppression of basic human rights being reported in Uganda?

Bobi Wine is an intimate portrait of a hugely engaging figure that also serves as a sobering warning about the seeming impossibility of democratic change in a dictatorship. We know what happened in the 2021 election, but the film captures such a stirring sense of Wine’s potential and Uganda’s wider struggle that we almost expect a different outcome. The defeat is heartrending, but Wine is unbowed. His quiet, unwavering resilience lends the film its grace notes.