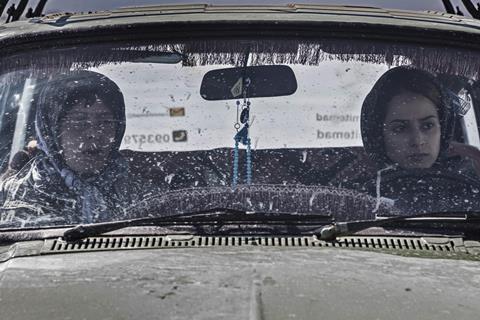 A pair of sisters who share a house on the outskirts of an Iranian town conspire to cover up the disappearance of their dominating brother in order to push ahead with a get-rich scheme growing magic mushrooms. But as time passes, the lie engulfs the reality in the mind of the older of the two women, Akram (Susan Parvar), who is autistic. It’s a striking, at times uncomfortable, feature debut from Kaveh Mazaheri. The film takes a subversively unexpected route to exploring women’s rights and agency within a society which requires a man to sign off on any major decision, including the one to turn the living room into a hallucinogenic fungi farm.

It’s an arresting work, both visually and formally

Botox screens in Hamburg having premiered at the virtual incarnation of the 2020 Torino Film Festival, where it won both the best film and best screenplay awards. While it might be a little offbeat to assert itself within the arthouse theatrical market, the film could find a home with a curated streaming platform. Mazaheri’s previous work includes the multi-award winning short Retouch, which took home two prizes from Tribeca 2017 amid numerous other trophies elsewhere.

It’s an arresting work, both visually — a washed-out, almost monochrome palette captures a landscape which was uninviting even before the winter coated it in ice – and formally. Mazaheri’s use of long, uninterrupted takes emphasises the physical struggle of being a woman — the two sisters spend a lot of time attempting to haul large cumbersome burdens, a metaphorical as well as a literal life of graft. There’s an absurdism to the situation in which the women find themselves, but Botox stops short of playing it for comedy. Nor does it milk the tension inherent in the threat of discovery of their lie about the whereabouts of their brother, Emad (Soroush Saeidi).

The title, with its suggestion of a superficial smoothing over the cracks of reality, comes from the place of work of the younger sister Azar (Mahdokht Molaei). A beautician by trade, she administers facials and flattery to wealthy women while Akram, who sometimes struggles when left on her own, glowers in the waiting room. It’s in the representation of Akram, meanwhile, that the film is perhaps most daring. She is an autistic character who is not romanticised as an ‘idiot savant’ or is gifted with genius, but rather depicted as sometimes prickly but frequently seems simply closed-off from the rest of the world. Emotions surrounding depictions of characters on the autistic spectrum can be highly charged, and this is unlikely to be an exception. But at the same time, she is a character through whose eyes we see at least some of the story and who, ultimately, is not just a pawn in the plot but someone who is given the power to shape events.

This might not be the film which promotes Mazaheri to key-player status on the world-cinema stage, but it is certainly an assured feature debut. If only for a superbly directed scene in which Azar fields a faked phone call while surrounded by thronging relatives, this picture consolidates his status as a name to watch.