'Children Of The Sea': Annecy Review 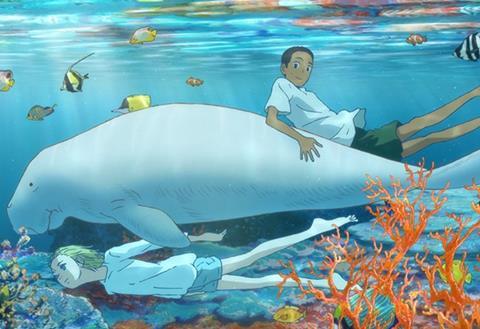 ‘Children of the Sea’

Ayumu Watanabe’s new animated feature Children Of The Sea (Kaijû no kodomo) doesn’t lack ambition. Based on the manga series published between 2007 and 2012, it is a dense, state-of-the-cosmos drama using animation that runs the gamut from delicate, misty water colours to kaleidoscopic 1960s acid trip. Too muddled and with too much of a sensory overload to be judged entirely successful, it could still find festival support and attract audiences with a commitment to environmentally-themed projects.

Director Ayumu Watanabe doesn’t quite find the clarity that the material requires.

The first half of Children Of The Sea is by far the most visually appealing and emotionally persuasive as Ayumu places a schoolgirl’s once-in-a-lifetime summer at the heart of a tale in which apocalyptic portents vie with more hopeful signs of cosmic connectedness.

Ruka (voiced by Mana Ashida) has always felt a connection to the sea. Her father works at an aquarium and she is haunted by memories of a childhood visit in which she saw a ghostly presence. An awkward outsider, her aggressive behaviour sees her banned from her handball team on the first day of the school holidays. She decides to visit Wonder Aquarium where she meets Umi (Hiiro Ishibashi). Raised at sea by dugongs, or sea cows, Umi has a passion for the ocean and struggles to adjust to life outside the water. A friendship soon develops.

Watanabe creates a charming sense of Ruka’s connection to the natural world. Her everyday existence is populated with wildlife and vibrant crimson flowers, strawberry coloured sunsets and a dozen different shades of blue in the changing moods of skies and seas. There are recurring moments that capture the dazzle of sunlight on water, the shimmer of reflections or the way rays of sunlight seem to drip from the sky. Placing Ayumu in the bright light and soft tones of the real world lends the film an echo of Studio Ghibli titles such as When Marnie Was There (2014). Ghibli veteran Joe Hisaishi provides the music.

Ruka’s growing friendship with Umi plays out against a world in which whales have been spotted in the waters around Manhattan and all sea creatures are being drawn to the site of a meteor crash. There is a growing sense of imbalance in the planet that can only end badly. Ruka’s concerns are both global and personal as she learns that Umi and his sickly brother Sora (Airu Kubozuka) may only have a short life span.

As the plot grows more mystical and challenging, the animation has the echo of a prolonged 2001: A Space Odyssey trip through the seas and stars expressing the way Ruka’s personal history and compassion tie her to the wider universe but also suggest that she is the universe in one human individual.

Watanabe doesn’t quite find the clarity that the material requires. The sudden switch from fatalistic concern for a doomed planet to a sense of hope in the future is not entirely convincing.

Full of interesting concepts and accomplished animation, Children Of The Sea is less than the sum of its many parts and just seems to lose its way after a very promising beginning.

Screenplay: Daisuke Igarashi based on his manga