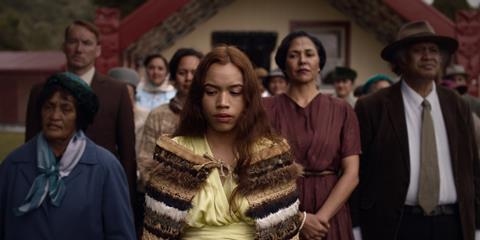 Many strands are woven elegantly together in this long-awaited adaptation of Patricia Grace’s best-selling novel: three cousins, three families, and three time frames in the Maori community of New Zealand between the post-war 1940s and today. Co-directors Ainsley Gardener and Briar Grace Smith tell a sprawling story of separation and disposession which feels both intimate in terms of its setting and epic in resonance.

Winner of the audience award at New Zealand’s Maoriland Film Festival in March, this should continue to be a popular peoples’ choice.

Moving and proudly matriarchal, Cousins dramatises the marginalisation of the Maori indigenous community, abuses which are been mirrored globally. Embraced by Ava DuVernay’s Array Releasing initiative, which afforded the film a limited theatrical release in the US in July, it now moves to Netflix. The streamer is a solid berth, yet this intimate film will still need word-of-mouth to rise up the algorithm and into homes. Rachel House is the biggest name in the cast for her work with Taika Waititi, including Thor Ragnarok, and audiences who appreciated her performance in Hunt For The Wilderpeople will as usual find much to admire here. Cousins has a strong female perspective, more a Radiance or, at times, a Beaches, than a Once Were Warriors, and that’s the audience which will ultimately embrace it.

There are, admittedly, some flaws which scratch at this screenplay adaptation. Chief of these is the identification of the families at the heart of Cousins: while the three girls themselves are beautifully characterised through three sets of notably well-matched cast changes, those surrounding them remain too hazily depicted. Sentimental shots of children dancing in a pastoral setting could have easily been jettisoned, or at least postponed. But after a tentative start, Cousins gains strength exponentially.

The starkness of Tanea Heke playing Mata/May, pain etched in every wrinkle of this homeless woman’s face, signifies the sudden seriousness of the subject matter. She shuffles through the city streets as the film moves back in time, to her cousins Makareta and Missy, and their families disrupted by the Second World War. Mata has been declared an orphan by the state and named May by the Mercy Home For Desolate Children, even as her Maori family desperately tres to get her back. Makereta, meanwhile, is being raised by her mother to secure the future of her people. And outspoken Missy is the most grounded of the three, so there’s no surprise when we flash forward to see her - now played by House - guarding the land against encroachment. Makareta, meanwhile, now played by co-director Briar Grace Smith, is devoting what’s left of her life to find Mata and bring her home.

The Maori world view - Te Ao Maori - is effectively presented here as the film-makers submerge the production in its culture, sounds and spirituality. It builds a humming momentum, as we watch Mata, separated from her heritage, struggle with her life and identity as her cousins fight for its very future.

Casting and performances are terrific. Physically, the three Matas come to resemble each other as the actors playing this damaged girl and woman channel her essence. The silent Heke is arresting as older Mata, but both the child and adult actors - Te Raukura Grey and Ana Scotney - are impressive. Scotney, in particular, is a fine performer who memorably featured in The Breaker Upperers. Child Missy - Keyahne Patrick-Williams - and her young adult incarnation played by Hariata Moriarty are also striking.

Mainly, though, plaudits go to the two directors, for an adaptation which is both sensitive and spirited and for creating a feeling of community that seeps off the screen. Raymond Edwards’ work as DoP flows with the piece, and editing by Angela Boyd helps lock in the continuity, a challenging part of Cousins. Winner of the audience award at New Zealand’s Maoriland Film Festival in March, this should continue to be a popular peoples’ choice.

Screenplay: Briar Grace Smith, from the novel by Patricia Grace