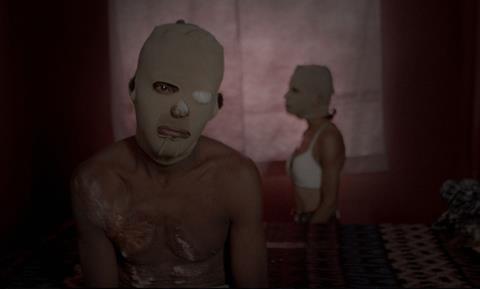 The full horrors of life in modern Mexico are revealed in Devil’s Freedom (La Libertad del diablo), a gripping documentary filled with vivid eye-witness testimony from a country where violence is commonplace, corruption is endemic and life is so cheap that it can be terminated for as little as ten dollars. Director Everardo Gonzalez (El Paso) patiently teases out the personal experiences of both victims and perpetrators caught in a national nightmare from which there seems to be no waking. The result is a mournful, spellbinding insight into the best and worst of humanity that should travel extensively to festivals and secure the support of specialist documentary distributors.

Gonzalez allows nothing to distract from the powerful testimony of his subjects. Individuals are filmed in shadowy, stark surroundings and everyone wears a mask to protect the identity of the innocent and the guilty. The plain mask, a cross between the protective equipment in Almodovar’s The Skin I Live In and a wrestler’s disguise, grants an anonymity to everyone. It also serves to physically underline the sense that they are all connected, all victims of a war against drug crime that, according to the press notes, has claimed 100,000 lives in the past five years. We see expressive eyes and mouths and witness the masks dampened by the flood of tears as the testimonies grow increasingly emotional.

The stories themselves are of torture and death; the pain of not knowing what has happened to family members who have disappeared and the shock of a mother recognising the sneaker of a son buried in the desert.

We also hear the stories of those who have worked for the drug gangs or the forces of law order. It becomes clear that the police and federal authorities are often more dangerous than the criminals. People talk of the power and status they experienced from killing. “It feels nice when someone runs away from you,” declares one speaker.

The off-camera questions are short and direct, serving to elicit facts and feelings. Gonzalez is content to keep the camera on the speaker, waiting for a telling observation or a moment of self-revelation. His style is intimate and unobtrusive and creates a sense of trust in which everyone appears to speak from the heart, offering unvarnished accounts of their past.

Gonzalez punctuates the film with brief exterior shots that feel like coming up for air. Visions of forests by dawn’s early light, misty mornings and a bustling colony of ants hint at a timeless natural world far removed from the population’s inhumanity to each other.  Sound becomes a vital element in the production from the sense of menace and foreboding in the score by Quinces Moreira to the tinkle of wind chimes caught in the breeze. Everything is so clear and intense that it encourages you to lean forward and catch every word.

Gonzalez isn’t in the business of trying to propose any solutions to Mexico’s problems but he does try to reach an understanding of the personal impact on those who have dared to be interviewed. There is an array of feelings from those who would seek retribution to those prepared to offer forgiveness. The guilty parties speak of shame and regret. The film builds to a conclusion made all the more poignant by the simple act of bravery in the final, lingering image.