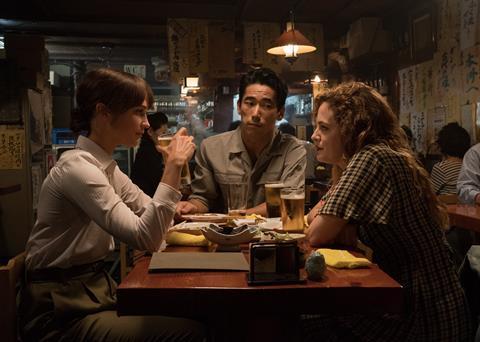 A knotty little made-for-Netflix drama with two big stars in Alicia Vikander and Riley Keough and an interesting visual appetite, Earthquake Bird is Wash Westmoreland’s follow-up to last year’s Colette. Set in 1989 Tokyo, it’s also a paean to the Adrian Lyne pulpy thriller of that time although with few of those same sexploitative fireworks. Vikander impresses with her “mastery” of Japanese (apparently learned by rote), and while her ultra-damped-down performance often makes the film seem underpowered, Earthquake Bird is a good match for high-end cable. A top-end technical team and Westmoreland’s cut-above, Oscar-nominated directing talents will help this stand out for the discerning home viewer who likes a guilty cable pleasure.

A subliminal connection to the Lucie Blackman case could resonate with viewers.

Premiering at the London Film Festival before some limited theatrical dates, Earthquake Bird’s time-capsule setting and clear intent to connect itself to the cinema of that era should earn it a free pass out of today’s cultural appropriation wars. Vikander and Keough play Tokyo expats, and the film itself is an admiring visual tourist. Japanese characters are treated with respect, if not veneration, with one very heavily-signalled exception. A subliminal connection to the Lucie Blackman case could resonate with viewers.

Westmoreland has adapted the novel by Susanna Jones, his first big-screen written work without late partner Richard Glatzer. Shot in and around Tokyo’s Toho Studios, Earthquake Bird is certainly visually authentic and enveloping, thanks to the stellar talents of production designer Yohei Taneda and Korean DoP Chong-hoon chung. Vikander, in her first lead role since Tomb Raider, takes all that exterior action and buries it deep for an internalised performance as long-term Japan resident and Swedish native ‘Lucy Fly’. “Death follows me around,” she warns someone early on in the piece: it certainly does.

Lucy is so sober in dress and subdued in comportment she is almost undistinguishable from the Tokyo salarymen and women as she makes her way to the office where she works as a translator. She has been living in Japan for five years, but learning Japanese for even longer, and wants to fit in with her adopted society, playing the cello in a string quartet with three kimono-clad older ladies. Lucy is intent on integrating, unlike the culturally clueless Lily Bridges (Keough), a former nurse who has just arrived in Japan to work as a bartender. As the film works backwards, however, we see her first in a ‘missing’ poster and then again when the police decide that Lucy is implicated in her mysterious disappearance.

We flash back to Lucy’s meet-cute with strange Japanese photographer Teiji (Naoki Kobayashi), a sushi-chef and part-time photographer with an attic studio who immediately cuts to the chase over a beer at the local tavern. “You are not normal,” he tells Lucy. “Why do you pretend to be? Tell me everything!”

Lucy begins to let herself go, ignoring the uncomfortable fact that Teiji only gets aroused when he hears about the death of one of her friends. And he keeps a locked cabinet in his attic with pictures of a girlfriend who has mysteriously vanished. Soon Lily, all 80s perm and brassy smiles as opposed to the impassive, stoic Lucy, becomes involved in the Lucy/Teiji dynamic in a way that clearly won’t end well. And Lucy, who has been involved in a few deaths in her short life, is suddenly having visions. Or is she?

Music by Atticus and Paul Ross delights in in the film’s period and genre trappings, from karaoke renditions of Foreigner songs to a throbbing nod to Giorgio Moroder. Everyone here appears to be revelling in the juicy opportunities Earthquake Bird brings to hit up our memories of everything from Fatal Attraction to Single White Female. Yet despite her remarkable vocal/linguistic facility, though, Vikander set herself apart from that pulp. Her Lucy is an elusive spirit, right up to the bitter end.

Screenplay: Wash Westmoreland, from the novel by Susanna Jones