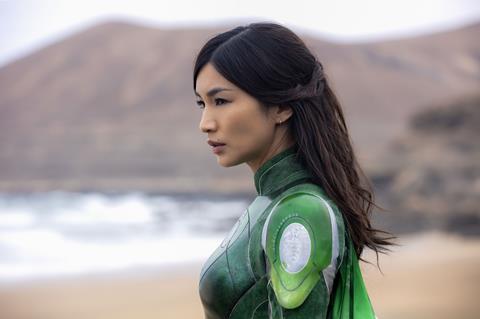 Marvel introduces a new crop of superheroes in Eternals, a tonally ambitious and more mature picture than is usual for the studio. With some strong performances and stirring moments, the film fights to differentiate itself from other Marvel Cinematic Universe pictures  — in particular, the blockbuster Avengers chapters — and it’s hard to shake the similarity between these immortal beings and those other costumed heroes. Loaded down with the same oversized action spectacle as so many previous comic-book pictures, Eternals continues Marvel’s recent struggles to deliver satisfying standalone films in the wake of 2019’s gargantuan Avengers: Endgame.

Operates in a darker register than earlier MCU instalments

Premiering at the Rome Film Festival before arriving in UK and US theatres on November 5, Eternals faces a lack of audience familiarity with these new characters. But there’s ample star power — including Gemma Chan, Richard Madden, Kumail Nanjiani, Salma Hayek and Angelina Jolie — and one should never underestimate Marvel’s commercial and cultural dominance.

Led by Ajak (Hayek), the Eternals are ageless interstellar warriors sent to Earth more than 7,000 years ago to defend humanity from frightening alien beasts known as the Deviants. The Eternals believe they eradicated the Deviants long ago, but when a new one appears in today’s London, attacking the kindly Sersi (Chan), who has been secretly living as a human, she must reunite the warriors to prepare for a new battle.

The film is directed and cowritten by Chloe Zhao, who won an Oscar for the touching Nomadland this year. There’s very little in common here with her previous stripped-down indie dramas, although she and cinematographer Ben Davis incorporate some of the same magical golden-hour photography she used to capture the majestic, wide-open landscapes of The Rider.

That said, Eternals exhibits a more adult sensibility, whether it’s the inclusion of a brief sex scene — an anomaly for the MCU — or the philosophical exploration of the warriros’ responsibility to the human race. (They don’t just protect humanity but closely monitor its evolution.) The return of the Deviants — and a shocking murder which results — forces the Eternals to question the assumptions they have made about the righteousness of their mission, driving wedges between members of this de facto family.

Zhao has gathered a sterling cast which brings pathos to the picture’s underlying emotional themes. Among the standouts, Chan is especially affecting as the soft-spoken Sersi, who will have to become more of a leader as Eternals rolls along. Madden exudes a conflicted air as Ikaris, who has mixed feelings about being the mightiest of the Eternals, able to fly and shoot beams from his eyes. (In one of the film’s cheekiest moments, a child mistakes him for Superman, a character from Marvel’s rival DC.) And Brian Tyree Henry is excellent playing Phastos, a nerdy tech whiz who believes his advancements will help humanity — but who discovers that sometimes, as with the nuclear bomb, Earthlings embrace their worst tendencies rather than their best.

But that Superman joke uncomfortably acknowledges one of Eternals’ fundamental weaknesses, which is that a story about a collection of superheroes isn’t particularly fresh anymore. After Avengers and Justice League, audiences have grown accustomed to the one-of-each-kind ensemble of crime-fighters, so it’s no surprise that the Eternals have one character with super-speed (Lauren Ridloff’s Makkari, a rare deaf superhero), one who can control minds (Barry Keoghan’s Druig), and the one who’s the comic relief (Nanjiani’s amusingly self-absorbed Kingo). Even Jolie’s fierce, beautiful Thena feels like a standard goddess-warrior type.

That said, Eternals operates in a darker register than earlier MCU instalments, making room for the death of main characters and introducing slightly scarier adversaries than normal. (The mammoth Deviants resemble a nasty combination of insect and cougar, all deadly tentacles and ferocious teeth.) Plus, Zhao spends some time on a moody love story between Sersi and Ikaris, who were together for centuries before going their separate ways after the presumed defeat of the Deviants. Chan and Madden boast a mature rapport that suggests an estranged couple with unfinished business — a development that’s threatened by revelations which eventually emerge.

But for every interesting wrinkle Zhao injects into the material, Eternals doubles down on the franchise’s shopworn conventions. Between the jokey humour, the life-or-death stakes, the complicated backstory regarding the origins of the Eternals, the effects-heavy finale and the end-credits teaser of future adventures, the picture doesn’t feel so much like it’s mapping out new territory as it’s labouring to ensure the Eternals fit within the pre-existing MCU narrative framework. These characters may be immortal, but the studio’s assembly-line predictability drains the vitality from the proceedings.